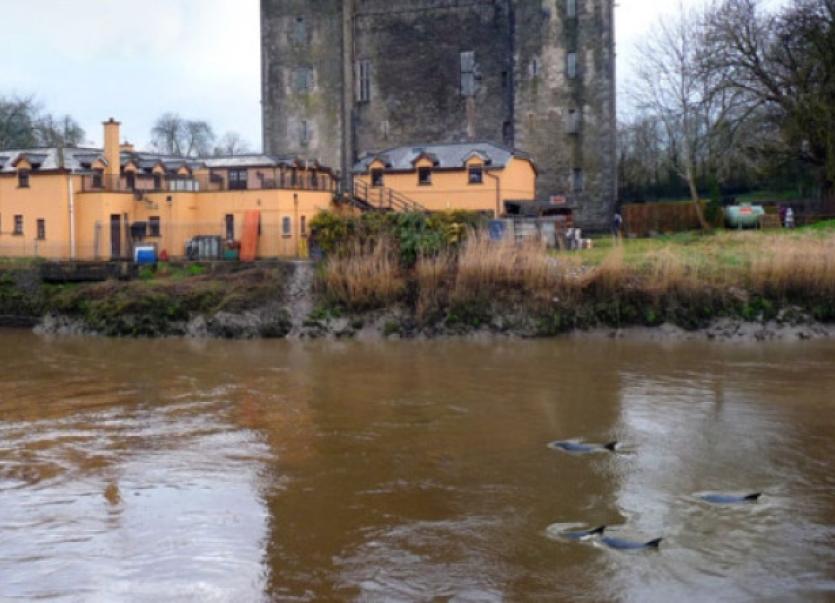 THERE are no signs that the small group of dolphins which appeared under the shadow of Bunratty Castle over Easter weekend are in any distress, according to the National Parks and Wildlife Service’s Seamus Hassett.

THERE are no signs that the small group of dolphins which appeared under the shadow of Bunratty Castle over Easter weekend are in any distress, according to the National Parks and Wildlife Service’s Seamus Hassett.

Various theories have been put forward as to how the three mammals ended up venturing into the relatively shallow waters of the Ratty River, where they have been delighting tourists and patrons of Durty Nellys for the last few days. One was that they had followed fish or eels into the tributary while others speculated they were unwell and had swam upriver to die.

Concern was heightened when they were first suspected to be common dolphins, a predominantly ocean-going species.

But it has since been established that they are bottle-nosed dolphins, which Mr Hassett said were a common sight on the estuary.

“We took some footage and sent it up to Padraig Whooley, who is the sightings validator with the Irish Whale and Dolphin Group, and he has identified them as bottle-nosed dolphins. There is a resident population of bottle-nosed dolphins in the Shannon Estuary and they are probably part of that group,” Mr Hassett said.

This species has been known to venture up to Coonagh and there have been rare sightings in Limerick city as far upstream as the Abbey River.

“Why they are there is all assumption at the moment. They may have followed fish up there but that is only speculation.”

There was no indication that the animals were in distress and the waters of the Ratty were deep enough to allow them to re-enter the Shannon whenever they saw fit to so do, Mr Hassett said.

Bunratty Search and Rescue and Killaloe Coast Guard were involved in unsuccessful efforts to usher the dolphins into deeper water on Easter Sunday. The coast guard was responding after concerns were raised that members of the public who had gathered to watch the animals might enter the water in an attempt to help them.

“We managed to push them out as far as the mouth of the (Ratty) river but they turned back and dived under the boat and went back to where they had started from. Maybe there is something out there frightening them that is making them turn back,” said Bob Potter, Bunratty Search and Rescue.

Dolphins were common on the lower reaches of the Estuary but it was “very unusual to see them in this area”.

“They were still there this morning [Wednesday] with a group of people watching them just opposite Durty Nelly’s north of the old bridge,” Mr Potter.

He agreed there were no signs that the animals were in any distress.

“They seem to be quite healthy and quite happy there. Why they are not going back out we just can’t tell. At this stage we are just going to let nature take its course and maybe they will go back out in their own good time,” Mr Potter said.

Should the dolphins decide to stay, tourism chiefs in Bunratty will be delighted to have another attraction to promote.