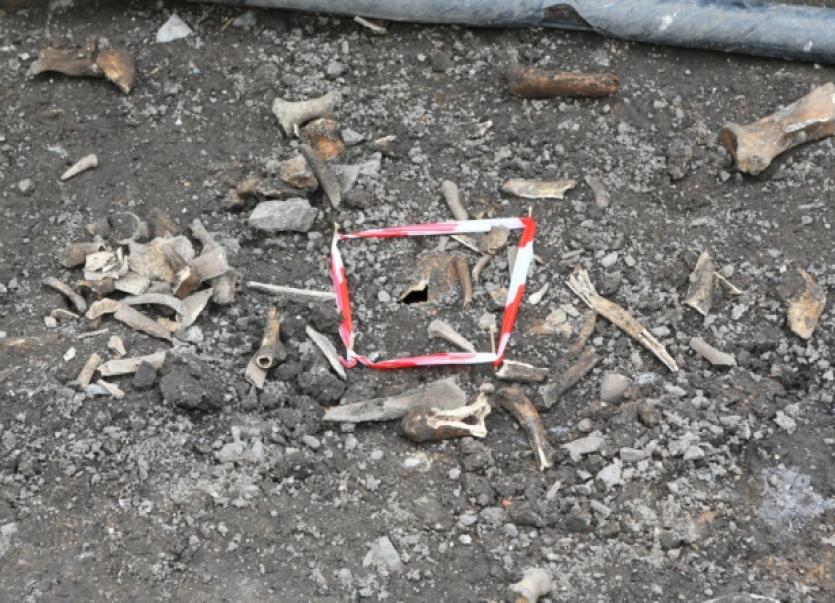 A NUMBER of skeletal remains have been discovered in Limerick in the historic Nicholas Street area of the city.

A NUMBER of skeletal remains have been discovered in Limerick in the historic Nicholas Street area of the city.

It is believed the remains, which were discovered this Friday morning, date back either to the 1300s or 1800s, according to experts who examining the remains.

The surprising discovery was made by contractors employed by Limerick City Council to remove a wall at the historic Widows’ Alms houses, close to King John’s Castle, in order to provide a new access route along the river to the redeveloped tourist attraction.

“They shouldn’t have removed that wall at all. Now they’re disturbing the dead,” one resident told the Limerick Leader this afternoon.

The removal of the wall had caused controversy amongst locals, who believed that an important part of local heritage had been destroyed without any consultation.

Mary Hayes, administrative officer with Limerick City Council, told this newspaper prior to the discovery that the National Monument section in the Department of the Environment advised that it was not the original wall, and was reassembled at a much later stage, possibly in the 1970s or 80s.

“The aim here is to create a pedestrian walkway between the river and the castle. It should enhance connectivity to Nicholas Street which should be good for all the businesses there,” she said.

The alms houses, dating back to 1690, were originally built to house the widows of soldiers from the Castle, are now under the control of the council and the buildings are used by St Mary’s Aid, which operates a meals on wheels service to those in need in the areas of St Mary’s and King’s Island.

Sinn Fein city councillor Maurice Quinlivan said he understood the wall may not have been as historically important as some believed, but was particularly annoyed with the lack of consultation with traders and residents on improving Nicholas Street.

“We do need to have an access route to the river, but this was done, as far as I can see, without any consultation,” he said.

Alf Ryan of Ryan Printers, who has been based on the street for 50 years, said: “The council have really deprived us of an awful lot on the street, and yet they expect everyone to survive and pay rates. It’s not a business friendly system they’ve put in - it’s a total sham.”

Pat Flynn, of Stix Cafe, which has been in business 33 years, said the redevelopment at the famous castle “has improved things immensely”, but believes signage should be erected to alert tourists to the street’s heritage.

“We just want them to give us a fair shake. We were showed a beautiful plan for the street, and we’d love for them [the council] to publish that plan just to show people there is a future for Nicholas Street,” he said.

Richard Rice, with Healy & Partners Architects, said as Castle Lane is closed off to the public as part of the redeveloped castle, a new walkway with access to river needed to be created and a number of strategies were examined. “It’s quite a positive thing, I would have thought, in that it opens up Nicholas Street and the river,” he said.

In discussions with St Mary’s Aid, they wished to bring a van onto the grounds to load up deliveries, which was a furthermore consideration for the works.