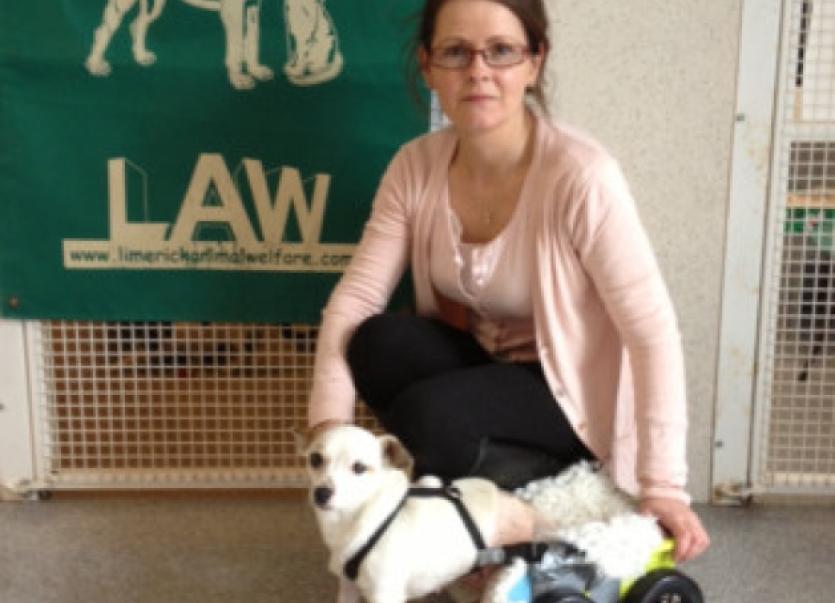 A LITTLE dog with a broken pelvis and back legs has got back on her feet thanks to a toy cart.

A LITTLE dog with a broken pelvis and back legs has got back on her feet thanks to a toy cart.

Found in Southill by a local, he took the Jack Russell Chihuahua cross to the vet’s and contacted LAW.

Ciara Walsh, of LAW, said when the gentleman found the dog he thought it was dying.

“She was whimpering. She had a broken pelvis, broken back legs, hernia and was covered in bite wounds,” said Ciara.

They think the dog was knocked down by a car to cause the broken bones and then attacked by another dog.

After her first surgery Ciara collected the dog and brought her home.

“They said she wasn’t to move around at all but she kept trying to stand up and struggle and walk around the place.

“I couldn’t get her to stay down. We would have had to tie her down,” said Ciara, who brings the two-year-old dog to LAW’s sanctuary in Kilfinane while she is at work there.

Ciara, from Kildimo, put her thinking cap on and remembered a toy she saw in Tescos.

“It’s a sand cart costing €10. I got the idea from watching her trying to crawl around. She would kind of get up on one leg at the back and then fall over. It was awful watching her,” said Ciara. “I was looking at her front legs and they were constantly going so I went and got the little sand cart,” she added.

Using duct tape and a harness Ciara carefully attached the dog who hasn’t looked back.

“It is the best of both worlds. She is able to move around freely as well as protecting her pelvis and back legs,” explained Ciara, who stresses that this is just a temporary measure as Penelope unfortunately has more surgery to come.

“She should make a full recovery in time, otherwise we would have got the proper wheelchair. I think they are five or six hundred dollars, they make them in the USA but this thing cost a tenner and it will do for a few weeks,” said Ciara.

The dog was originally called Jelly Bean but this was changed to Penelope Pitstop after she got her set of wheels. The only problem is she isn’t taking too many pitstops.

“I think she’s going to lose a wheel soon if she doesn’t slow down a bit. I will need to get her new wheels!” smiled Ciara.