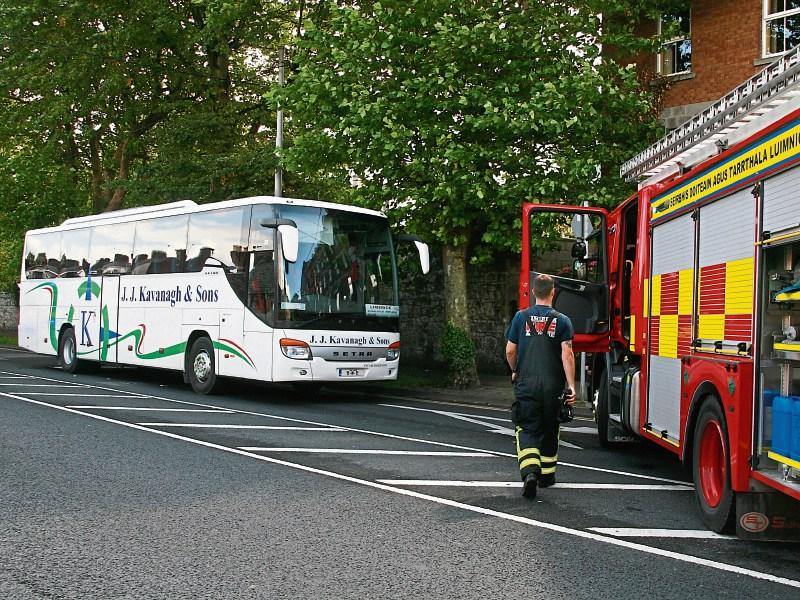 The scene of the incident at Clare Street - Picture: Adrian Butler

Richard Last, who works for JJ Kavanaghs and Sons, was driving from Nenagh to Arthurs Quay in the city centre when he was alerted to smoke and flames emanating from the engine compartment at the rear of the bus.

He immediately stopped the 11-W registered bus at Clare Street and evacuated all of the passengers before tackling the fire.

“The electrics just went and I pressed the button to open the door and it didn’t work so I opened the emergency door and just got them out (the passengers) as quick as I could,” explained Richard – a former truck driver.

Once the 25 passengers were safe and clear of the bus, the Tipperary driver then went to the back of the vehicle and tackled the flames before they spread to the main cabin.

“It was on fire at back. When I open the boot I could see the flames so I sprayed the stuff on top and underneath,” he said adding that it was the first time a fire has broken out while he was driving.

Emergency services are at the scene of a bus fire on Clare Street @Limerick_Leader pic.twitter.com/1cJZkwEGtF

While emergency services, including three units of Limerick Fire and Rescue Service were on the scene within minutes the fire was put out before they arrived.

“He did a good job getting everyone off and he put the fire out with the on-board extinguisher it could have been a lot worse,” said one fireman.

“He had the fire out when we arrived so it was a matter of dampening it down and checking the bus,” he added.

A section of Clare Street was closed to traffic for a short time as the bus was examined by firemen who suspect an electrical fault caused the fire.

LIMERICK: Clare St reopened both ways at its junction with Lelia St following a bus fire. Any delays should ease. https://t.co/pdsEzJTRQr

Clare Street has since reopened to traffic and the bus is due to be removed from the area by tow-truck later this Tuesday.