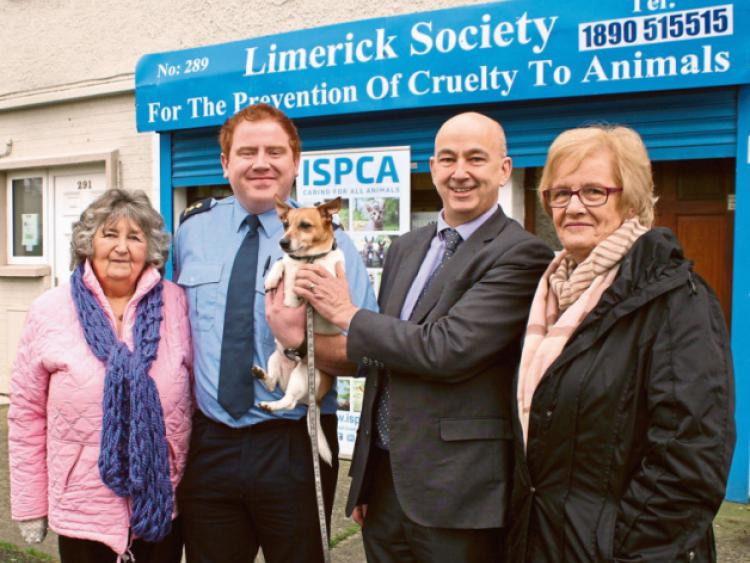 THE LIMERICK Society for the Prevention of Cruelty to Animals (LSPCA) expects there will be an increased number of prosecutions in 2016, following the appointment of a new inspector to Limerick with increased powers to tackle animal cruelty and neglect.

THE LIMERICK Society for the Prevention of Cruelty to Animals (LSPCA) expects there will be an increased number of prosecutions in 2016, following the appointment of a new inspector to Limerick with increased powers to tackle animal cruelty and neglect.

Speaking from their Limerick offices on the Hyde Road, Dr Andrew Kelly, chief executive officer of the ISPCA, said that thanks to a generous donation from the late Elizabeth Burke they have been able to fill the new role of a full-time inspector in Limerick.

While Limerick city and county has had an inspector in the past they were largely reliant on the availability of members of An Garda Siochana to assist them in their work.

“The ISPCA has collaborated with Limerick SPCA, one of ISPCA’s affiliated members, which we believe is a significant step forward for animal welfare in Limerick.

Until recently, the ISPCA had six inspectors covering 14 counties. We now have eight inspectors, covering 17 counties and we aim to recruit more in the coming years,” explained Dr Kelly.

He said the ISPCA inspectors are authorised officers under the Animal Health and Welfare Act 2013, which came into force in March 2014. This authorisation gives statutory powers to ISPCA inspectors giving them authority to enter land to inspect animals; seize animals that are suffering and to issue enforceable animal welfare notices.

“This allows ISPCA Inspectors to be more effective in dealing with allegations of cruelty or neglect. Since receiving authorisation in May 2014, ISPCA inspectors have initiated over 50 prosecutions and have submitted 21 files either to Department of Agriculture or An Garda Siochana, six of which have already been finalised in court with positive outcomes,” he told the Limerick Leader.

He continued: “We are sure that this is going to be of real benefit to Limerick, to the animals of people and the people of Limerick. Previously the LSPCA were reliant on help from the gardai if they had a complaint. Now our officers are authorised under the Animal Health and Welfare Act, which came into effect in 2014 and is a significant step towards for welfare in Ireland.

Regarding the recent cases which were brought to court, he said all the defendants pled guilty, but said they would like to see higher penalties which will come in time. The penalties are up to €5,000 and can also carry six months in jail.

ISPCA inspector David Walsh, based in Limerick city and county, said many of the cases he has seen refer to horse problems, as well as dogs. He said there has also been a smaller amount of cases referring to swans on the banks of the Shannon.

He said two files in relation to animal cruelty and neglect in Limerick have been sent to the DPP, after they were first sent to the Department of Agriculture. In one case nine dogs were taken out an apartment, after being kept in a cage in a sitting room.

He couldn’t comment about the other case as it is still being finalised.

“Limerick has always had a part-time inspector, but now there will be more follow-ups and more prosecutions. If people make the call to the national helpline they can nearly be guaranteed I’ll get out to see them, and we’ll take it from there,” he said.