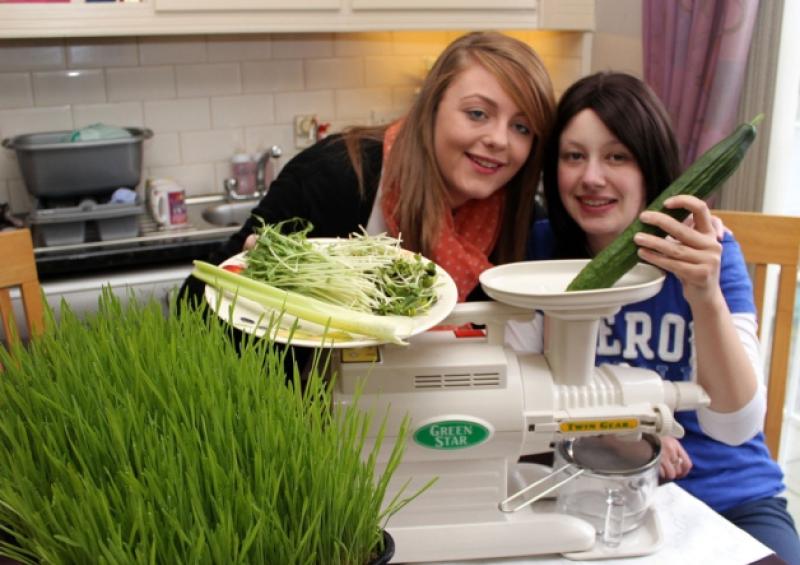 A 23 year-old mum who has been told she has just months to live has turned down further rounds of chemotherapy in the hope that a clinic in Florida can save her life.

A 23 year-old mum who has been told she has just months to live has turned down further rounds of chemotherapy in the hope that a clinic in Florida can save her life.

Stephanie O’Halloran, from Garryowen, was told just days before her 23rd birthday that she had inflammatory breast cancer, which had spread to nearly every part of her body, and was given nine months to live.

However, in the space of just two months, over €28,600 has been raised by a diverse range of local groups to help Stephanie receive treatment in a Florida clinic, which advocates a completely organic, green plant based diet to reverse the symptoms of cancer. She has already undergone one 21-day course and believes her body has quickly shown signs of dramatic improvement.

The mum of an 20-month old daughter was originally told that only chemotherapy could prolong her life, but after two rounds of chemotherapy she decided there had to be a better way to kill her cancer and save her life.

Stephanie told the Limerick Leader she wished to speak out about her life choices to raise awareness that younger women can also contract breast cancer.

“It’s no longer an older woman’s cancer, it’s affecting more younger women now, and inflammatory breast cancer is not your average type of cancer. There is no lump. It’s a quick onset and by the time it’s found, the cancer is already in the later stages of progression.

Stephanie, who graduated from Limerick Institute of Technology with a marketing management degree in October, received the devastating diagnosis on Tuesday, September 10 and began chemotherapy that Friday. She had also just passed her driving test.

“It was a very, very quick process. There was no time to think, or digest the news. My cancer was so aggressive, the only way they could treat it was to be aggressive back to it. After the second dose of chemo, I felt there has to be something else.”

After searching online for alternative treatments, her family heard that Dr Brian Clement from the Hippocrates Health Institute in Florida was speaking at a seminar in Galway that week. A number of other Irish people have attended his clinics and have received breakthrough turnarounds in their conditions, including Dubliner Bernadette Bohan, who was also diagnosed with breast cancer 13 years ago, and went on to write the book The Choice about how a raw vegan diet saved her life.

“When I went to see him he offered me hope that was not offered here, and in a horrible situation you cling to whatever hope is given. After speaking to him I made the decision that I was going to come off all conventional medicine, and go out there to give me the best shot I have.”

Stephanie’s daily diet no longer includes any meat, fruits or dairy products, and centres around salads with sprouts, wheatgrass shots, and green juices which are solely made from cucumber, celery and sprouts.

“If I don’t do this and put into practice the skills I was taught out there, I actually won’t survive this. The time is very limited. Dr Clement has helped people to reverse stage four brain cancer; the evidence is there to back it up. If you follow the programme that they set out for you, the evidence is there that you are on line towards reversing your symptoms.

Stephanie’s liver function has now returned to normal, whereas previously there were cancer strains in September. An open wound in her breast has also decreased to less than half its original size. “It’s absolutely amazing to think that something as simple as changing your diet can help you to reverse this. If you’re not positive you know you’re only going to go one way. The first step to recovery is to cure what’s in your head, and if you can think positive, you’ll feel positive and act positive. If you sit there and believe that you’re going to die, your body is going to shut down, and you’re going to feel miserable, whereas I don’t feel like that.”

Stephanie said her strong faith, belief in the power of prayer, her supportive family and surviving to be there for her daughter, Robyn, has provided her with the courage she needs. “All you need to do is look at her face every day and keep going for her. At the end of the day, you weren’t given a child to be taken away so fast from her life. My belief is I’m going to be here for the next 20 or 30 years to rear her fully up into an adult.”

She plans to return to Florida in February or March, with the trip costing €17,000, after sending her blood results.

The benefit night in the Greenhills hotel was organised by Stephanie’s aunt, Carole Werfelli, along with Saphra Werfelli, Zenyia and Maria O’Donnell, and Alice O’Farrell.

They wish to thank many people for their time, donations and efforts to help Stephanie, including amongst many others, Live 95FM, the Greenhills hotel, the Night Owls and Friends, Steve Spade, Aidan O’Clohessy, JP Dillon, Siobhan O’Brien, Eve Stafford, Emma Lane, Louise Tsang, Keith Curley of Think Creative printers, Dunnes Stores on the Childers Road, St John’s primary school and many others.