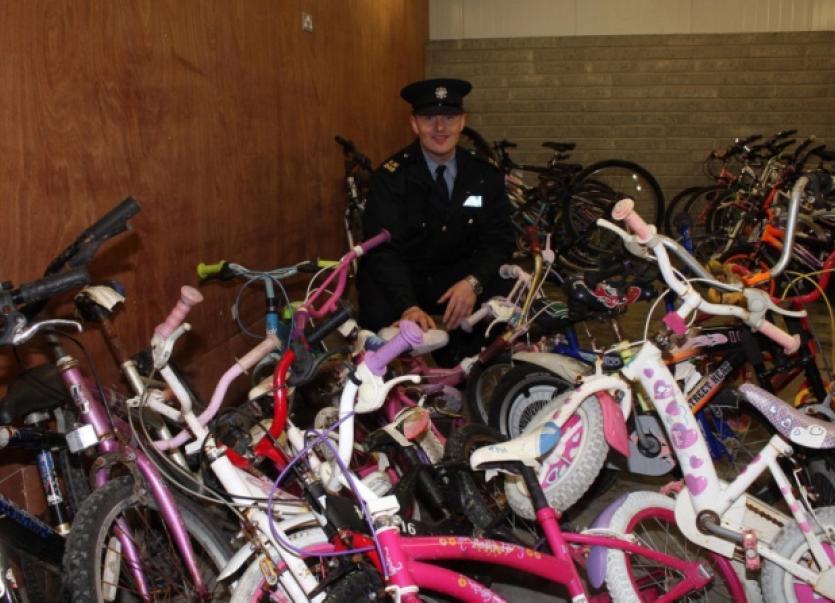 GARDAI in Limerick are seeking to return more than 70 stolen bikes to their rightful owners, after a major operation in the city.

GARDAI in Limerick are seeking to return more than 70 stolen bikes to their rightful owners, after a major operation in the city.

Chief Superintendent Dave Sheahan told the Limerick Leader that this was a specific operation under Operation Thor, and since their discovery a man has been arrested and released without charge, pending further investigations.

The wheels of many of the bikes had been removed to transport them more easily across Europe as part of a “big and lucrative” operation, gardai believe.

The bikes range from some top end models, valued at up to €850 down to children’s bikes for some €150. Gardai are now compiling an inventory of all the bicycles seized.

”All the wheels were taken off and there were cable ties attached to the frames. They were ready for movement. We noticed there had been a spike in bicycle thefts, and were trying to establish where all these bikes were going,” he told the Leader.

The bikes were found in an open area at the rear of a house in Castletroy, which was targeted by gardaí, under Superintendent Derek Smart of Henry Street Station, after a search warrant was obtained.

They were covered by plastic tarpaulin and all the wheels had been removed to facilitate their ‘packaging’ with the use of plastic ties.

While the owners of some of the bikes have been located, the investigation has now been broadened to try and find other owners.

The bikes were reportedly brought to a certain provider who paid those directly involved in the thefts. Gardaí suspect that a number of large consignments of stolen bikes have already been sent from Limerick to Europe.

Suspicions were also aroused as large transport vans called regularly to the house to remove loads for export.

It is believed the bicycles were stolen from Castletroy, Monaleen and other areas surrounding the University of Limerick, possibly in April and May. But the operation may have been initiated for some time before that.

The investigation is ongoing and anyone with information to contact any Garda Station.

Operation Thor is a €5m, multi-stranded national operation which builds on previous and current garda operations to tackle crime.