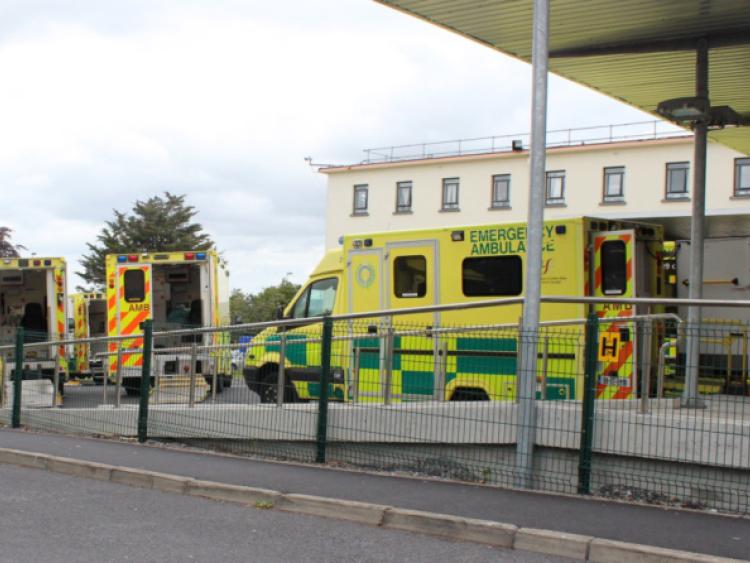 MANAGEMENT at University Hospital Limerick have apologised after an increase in patients attending the emergency department caused “long delays” and resulted in up to 11 ambulances being backed up outside the hospital.

MANAGEMENT at University Hospital Limerick have apologised after an increase in patients attending the emergency department caused “long delays” and resulted in up to 11 ambulances being backed up outside the hospital.

The overcrowding came to a peak last Thursday night, when the ambulances were stacked up for three hours, a situation one hospital worker compared to as akin to the “runways at Heathrow”.

The delay was caused, the hospital worker - who did not wish to be identified - said because there was “simply too many people wanting to access the emergency department and not enough beds available”.

Patients referred to A&E faced lengthy delays as a result of the ambulances backing up outside the Dooradoyle facility.

It has also emerged that a 101 year old woman experienced a 25 hour wait on a trolley for a bed at UHL over the weekend.

A spokesperson for UHL conceded that there was “an increase in emergency presentations over the last week which has resulted in long delays for patients”.

“During particularly busy times on Thursday a number of ambulances experienced delays discharging patients to the care of UHL, however every effort was made to free up ambulances as a priority,” said the spokesperson.

“Our staff are working very hard to ensure the optimum care and safety of all our patients during this very busy period. The UL Hospital Group apologises that any patient has to wait to be admitted,” they added.

According to the INMO figures, there were 27 people on trollies in UHL last Thursday, dropping slightly to 24 the following day.

The 101 year old Clare woman experienced the 25 hour wait on a trolley for a bed over the weekend. She also faced a five hour wait for an ambulance to take her to the hospital where, because of delays at the emergency department, she faced the lengthy stint on a trolley.

The incident comes after health minister Leo Varadkar said there would be “zero tolerance” for a situation whereby anyone would wait longer than 24 hours on a trolley.

Mary Fogarty of the INMO said that particular incident was “inhumane and you wouldn’t see it in the Third World”.

“It is a catastrophic situation where the oldest person in the hospital is left to languish on a trolley for all of that time,” she said.

Ms Fogarty added: “At some point, when you don’t have enough beds, you have got to decide, who do I treat? Do I treat the patients that are on trolleys in the emergency department, or do I bring in people for planned care?

“And I think when you are at that stage in a hospital and are so overcrowded, and you have elderly people - a woman of 101 - and she is left there, for over a day, that is just unacceptable. Don’t tell me that there wasn’t some way that that lady could have been prioritised and given the care that she deserved.”

The UHL group said that as part of its plan to address the delays, all beds across the group are open and patients who have finished their care are being discharged home or to the community.

“Where possible patients are being transferred from UHL to Ennis Hospital, Nenagh Hospital and St John’s Hospital for ongoing treatment,” said the spokesperson.

The hospitals group reminded patients to keep the emergency department “for emergencies only and to contact their GP or GP Out of Hours services in the first instance”.

“GPs have a number of options available to them including referring patients to Medical Assessment Units which are operational in Ennis Hospital, Nenagh Hospital and St John’s Hospital, thus avoiding the patient having to wait for extended periods in the ED,” they said.

“Local Injury Units are open in Ennis and Nenagh Hospitals from 8am to 8pm, Monday to Sunday and 8am to 6pm Monday to Friday at St. John’s Hospital. Patients aged five years-plus with minor injuries; for example suspected broken bones in arm or lower leg, sprains, strains, minor scalds, burns or cuts are encouraged to visit their Local Injury Units for treatment,” added the spokesperson.

The UHL emergency department has been under severe pressure a number of times already this year, most notably in February, when elective surgery had to be cancelled as the hospital struggled to cope with an “unprecedented number” of presentations, a situation Fianna Fail’s Deputy Niall Collins described as “extremely serious” at the time.