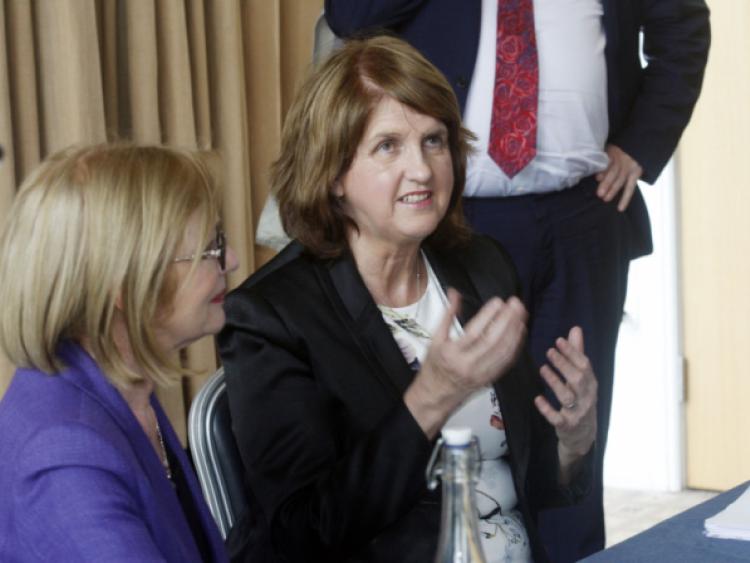 MINISTER Jan O’Sullivan has confirmed her intention to run in the general election next year, with hers the only name to go before members of the Labour Party at a selection convention later this month.

MINISTER Jan O’Sullivan has confirmed her intention to run in the general election next year, with hers the only name to go before members of the Labour Party at a selection convention later this month.

Tanaiste Joan Burton, who was in Limerick on Friday to campaign for a Yes vote in the upcoming same-sex marriage referendum, will return to chair the Limerick City convention on Monday, May 18.

Minister O’Sullivan, who will turn 65 before polling day, last year scotched speculation she could bow out of politics and has proven true to her word in going forward for selection. She won a by-election for Labour in 1997 following the death of Jim Kemmy and has been the party’s standard-bearer in the city in getting re-elected in every election since.

“The members have got a letter indicating that I am the only candidate who is duly qualified to be nominated,” she said.

“You can never count your chickens before they are hatched but all going well I am assuming I will be a candidate and obviously a one-candidate strategy is the only strategy for this election.”

With many predicting Labour will pay for its support of water charges and austerity measures, the Tanaiste sounded an upbeat note on the party’s prospects.

“We are extremely confident given the recovery the country has entered into,” she said.

On last week’s spring statement on the public finances, she said: “As we face into the budget, we have something like €1.5 billion which we are going to be able to utilise in terms of further reforms of the tax system, particularly the USC, and secondly in relation to investment and spending packages in health, education and social welfare, building on the model I agreed with the Taoiseach after I was elected as leader of the Labour Party”.