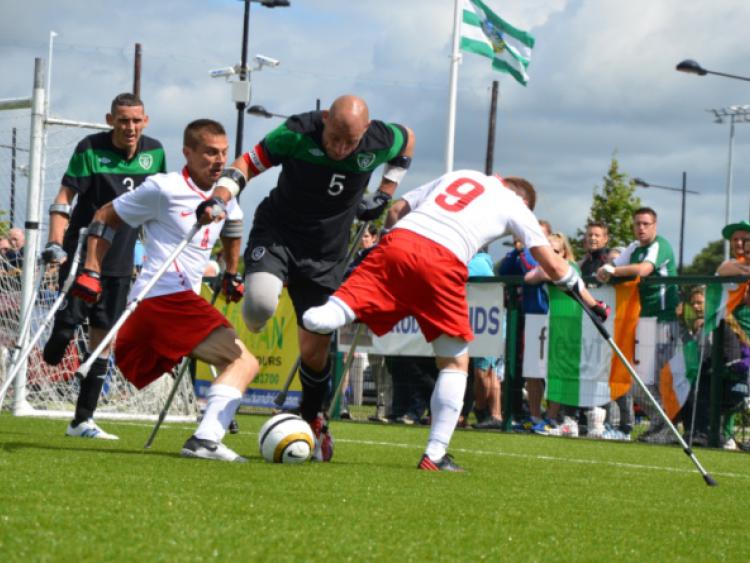 MORE than 100 amputee soccer players from across Europe were in Limerick last weekend for a unique two day soccer tournament.

MORE than 100 amputee soccer players from across Europe were in Limerick last weekend for a unique two day soccer tournament.

Poland, Belgium, Germany battled it out with England, the Netherlands and Ireland for the Paddy Power Cup which drew big crowds to the university.

This was the first amputee tournament ever played in Ireland, with the aim to raise the profile of amputee soccer players.

There were no divided loyalties for Londoner Simon Baker, who lined up for the Irish amputee side against their English counterparts.

Simon, the chairman of amputee football in Ireland, said: “I was really proud. It was the first time an amputee team had put on an Ireland kit. We were very proud to wear the international kit.”

Unfortunately, the Irish side lost 6-0 against an English team which finished fifth at the last Amputee World Cup.

Despite this, the side rallied to beat the Netherlands 2-0, and eventually finished in third place.

But the performance of the FAI-backed team was secondary to building the profile of Irish amputee soccer.

Simon now feels that their profile is high enough to bid for the 2016 World Cup, having welcomed the president of the World Amputee Football Association Rick Hoffman, and the founder of amputee football Don Bennett.

“I was very proud to show these people the fantastic facilities we have. My main goal for the tournament was to get the powers that be to see our game and take us seriously,” Simon said.

In a bid to further improve, the Irish team has started playing against able-bodied sides.