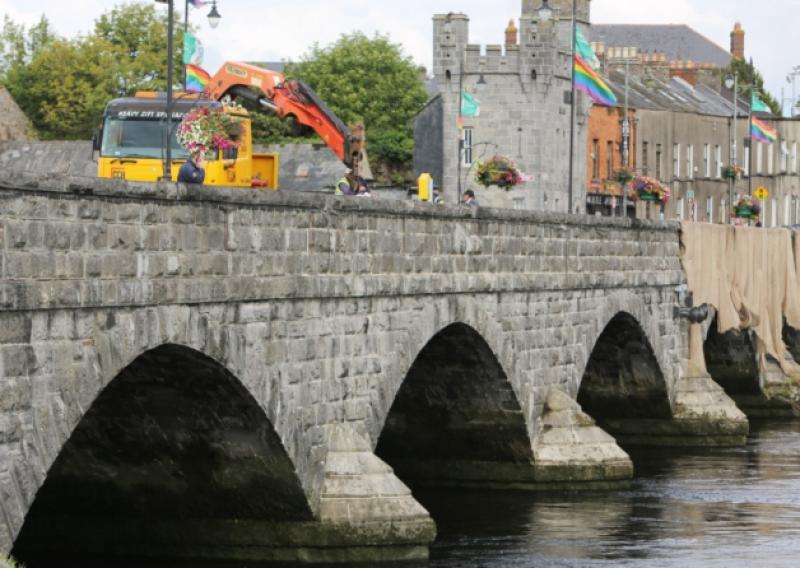 TWO men have died following an incident at Thomond Bridge in Limerick city this Saturday, it has been confirmed.

TWO men have died following an incident at Thomond Bridge in Limerick city this Saturday, it has been confirmed.

The men died while carrying out maintenance works on the bridge. The cage they were suspended from fell from its crane and plunged into the Shannon.

Three men were in the cage and were wearing lifejackets but were harnessed and attached to it when it gave away and fell into the water. One man managed to free himself, but the other two were under the water for up to ten minutes, it is believed.

The men were removed from the water by Limerick City Fire and Rescue Service, with the assistance of Limerick Marine Search and Rescue. The two men were unresponsive when they were removed by ambulance to University Hospital Limerick, where they were pronounced dead. A third man was conscious and informed emergency responders what had happened in the incident.

In a statement, Limerick City and County Council confirmed that two men died in the incident.

“It is with deep regret that Limerick City and County Council can confirm that two employees of a firm contracted to undertake remedial works to Thomond Bridge in Limerick City have died in a workplace incident this afternoon (Saturday),” it said.

“The Council is liaising with An Garda Síochána and the Health & Safety Authority in relation to the incident. The Thomond Bridge is presently undergoing remedial works, which commenced on Monday last.

“Limerick City and County Council wishes to extend its deepest sympathies to the families and colleagues of the deceased,” it added.

It is understood that the men who died were from Co Kerry and Co Clare and that their families have now been informed. It is believed that the firm contracted to carry out the works was a Limerick based company.

The men were specialist contractors carrying out the pointing works on the bridge, work which began last Monday.

Limerick Fire Service were first on the scene at 3.46pm, just three minutes after being contacted. A number of Swift Water Rescue Technicians worked to free the men from the cage, which was below the level of the water.

Joe Morgan of Limerick Marine Search and Rescue was at the scene and said: “As far as we know, there was three lads working in a cage on the outside of the bridge, they were suspended over the water. Whatever failed on their safety system, the cage fell into the water.

“One man got away and was floating down river when we came onto him. We took him on and he was conscious, he told us his two colleagues were still trapped under water.

“Limerick Fire Brigade were on the bridge and were lowering their SRT team down into the water by a rope. We headed up and assisted him and got one of the casualties into our boat. He was unconscious, we brought him to our new pontoon there where we met the ambulance.

“Limerick Fire recovered the third person from the water and brought him as far as the Curragower Slip and met the ambulance there.”

Mayor of the Metropolitan District, Cllr Jerry O’Dea said his thoughts were with the families of the men involved in the incident.

“The full facts of what happened are not clear but obviously this was a very tragic incident. My initial thoughts are with the families of these men who have died. I presume there will be a full investigation into what happened,” he said.