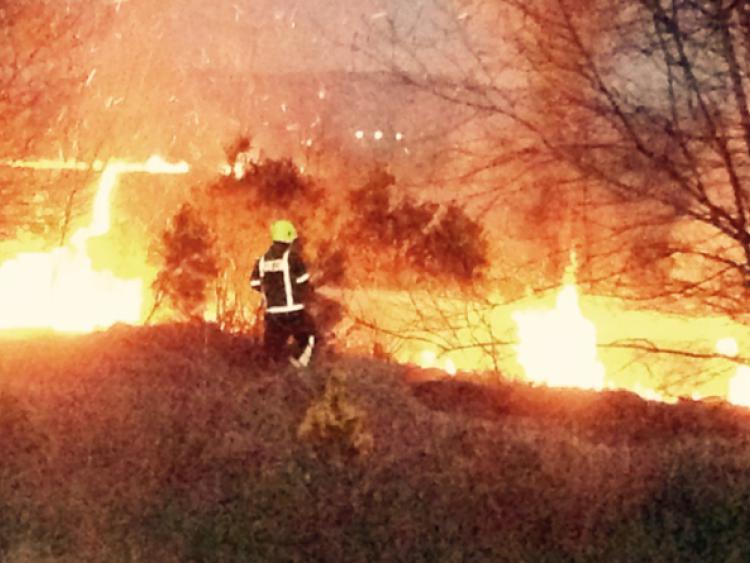 LIMERICK firefighters spent over two hours putting out a gorse fire that came perilously close to a house near Gooig, Castleconnell on Tuesday evening.

LIMERICK firefighters spent over two hours putting out a gorse fire that came perilously close to a house near Gooig, Castleconnell on Tuesday evening.

Units from Limerick city and Cappamore fire stations were called to the scene shortly after 8pm. Minutes later they began quenching the blaze that extended to hundreds of metres and two metre high flames in patches.

Catherine St George, who took the photograph above, was out walking on the old Dublin Road with her neighbour, Kim McKenna. “It wasn’t that far in from the road. There are two houses along that road, it was literally just beside one of them. It was a full circle of fire.

“Some of the firemen were beating it out and more of them near the house had hoses. I would have been worried if it was my house,” said Catherine.

Plumes of smoke could be seen from the fire – which it is understood was not started maliciously – over Castleconnell village. There was no injuries or damage to property. The last unit of the fire service left at 10.30pm.

Two men who know the area well and have been cutting turf in the locality since they were boys are Willie Keane and Billy Connolly.

“It would be very unusual to have fires this time of year,” said Willie. While, Billy said: “I couldn’t believe it that it took off that quick - especially this time of the year because it hasn’t dried out that fast.”

A spokesperson for Limerick Fire Service said: “We would remind people that at this time of year - and with the current good weather - areas of grass and scrub land are very dry and can easily catch fire.

“So care should be taken with any discarded cigarettes, and any fires should be supervised and set in a safe area where embers cannot travel and cause a fire nearby.”

Under the Wildlife Acts, it is illegal to burn growing vegetation on uncultivated land between March 1 and August 31 and that persons engaged in such illegal activity are liable to prosecution and could face fines and/or imprisonment.