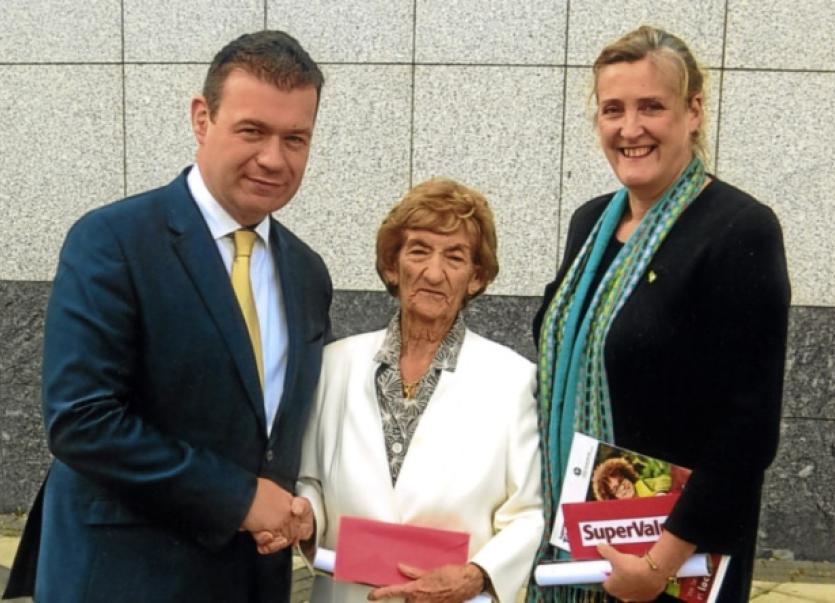 The contribution made by Adare’s Dolly O’Neill to the Tidy Towns movement over the last 50 years has been recognised with a special Supervalu Tidy Town hero award.

The contribution made by Adare’s Dolly O’Neill to the Tidy Towns movement over the last 50 years has been recognised with a special Supervalu Tidy Town hero award.

The 92-year-old Adare woman has been a stalwart of the local group since it was established in 1964.

Since then, she has played a very active role in all the group’s activities, with a particular interest in keeping the village’s flower beds in bloom.

Local chairman Michael Brennan praised Dolly for her tireless work on behalf of the community.

“She is a great ambassador for Adare Tidy Towns and is tireless in the work she does. Anything Dolly asks for, Dolly gets,” Mr Brennan commented.

“Everyone in Adare is delighted for her that she got this award. There is no-one more deserving of this recognition,” he added.

In addition to working hard on behalf of the Tidy Towns committee, Dolly also gives her time to a range of local voluntary organisations.

Chairperson of Limerick Tidy Towns committee Helen O’Donnell also received a Tidy Towns hero award. According to the citation, Helen is “consistently enthusiastic and works tirelessly behind the scenes. She is a shining example of how commitment, drive and positivity in one person can achieve so much”.

On hand to present the prizes was Michael Morgan, sales director of SuperValu, the competition’s main sponsor for the 23rd year. The Helix was packed with representatives of Tidy Towns groups from all over the country. The announcement was greeted by great celebration at the awards ceremony.