Garda and prison officer found not guilty after brawl 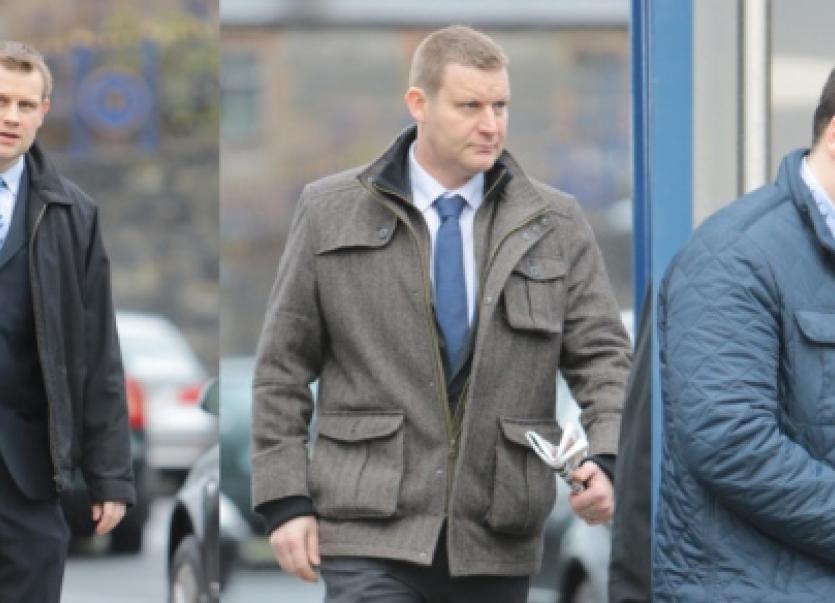 A DUBLIN-based garda who was involved in a street brawl during a night out in Limerick has been acquitted of criminal charges.

A DUBLIN-based garda who was involved in a street brawl during a night out in Limerick has been acquitted of criminal charges.

Garda Adrian Joyce, 31, who is attached to Pearse Street garda station, was returning to his hotel in the city following a stag when he and his brother, Nicholas Joyce, 40, became involved in a drunken melee.

Both men were subsequently charged with affray along with another man, David McCarthy, aged 28, of Merval Park, Clareview, who pleaded guilty to the charge earlier this year.

During a contested hearing Limerick District Court was told the charge related to an incident at O’Connell Street in the early hours of July 7, 2013.

CCTV footage shows the Joyce brothers – who are originally from Co Mayo – walking back to their hotel with a friend when Mr McCarthy purposely lowers his shoulder, hitting Nicholas Joyce as he walks against him on the street.

Mr McCarthy can then be seen walking on around 10 metres before being called back by the defendants and their friend.

The court heard a verbal and physical altercation then ensued for several minutes moving from the footpath onto the public street forcing cars to stop or take evasive action.

During what was described as a “running street fight” Mr McCarthy can be seen adopting, what state solicitor Michael Murray described as a “pugilistic style” boxing stance.

In his evidence, Inspector Seamus Ruane, who was assigned to investigate the incident, said Mr McCarthy’s stance was similar to that of Muhammad Ali.

Judge Eugene O’Kelly was told that when gardai arrived on the scene of the fight, Mr McCarthy had partially removed his shirt and was acting in an ““irrational, belligerent manner”.

One witness said he didn’t intervene as Mr McCarthy was behaving like an “animal”, who he believed was “on something”.

In his evidence Sergeant Gerard Staunton said as he was driving up O’Connell Street he observed Mr McCarthy in the middle of the street.

He described how after he asked him to move off the street he told him to “f*** off before running directly at the other three men resulting in all four falling onto the ground.

Garda Ivan Hanniffy told the court he had to use pepper spray while arresting Mr McCarthy as he violently resisted grabbing him around the neck and stab vest. He agreed with Michael Bowman BL, representing Adrian Joyce, that he feared for his safety and that pepper spray is only used when absolutely necessary.

The court heard that at one point both Sgt Staunton and Garda Hanniffy saw Adrian Joyce kick David McCarthy while he was on the ground on top of his brother, who works as prison officer in England.

It was submitted by Mr Bowman that his client’s actions were not unlawful as his motivation was to defend his brother who was “prone and vulnerable on the ground”.

Both garda witnesses agreed under cross examination that having viewed the CCTV footage of the incident this was a reasonable contention.

In doing so, he said he was not satisfied the force used was disproportionate and therefore unlawful.

He added that while members of An Garda Siochana are not entitled to act above the law they are entitled to the protections it provides.

The judge added he did not believe the factual background to the incident, as outlined in court, supported the charge of affray.

In relation to Mr McCarthy, the judge noted he had no previous convictions, has a successful career as an engineer and that the incident appeared to be a “complete and total aberration”.

He said the 28-year-old was entitled to be given a chance and he indicated if he pays €750 to the court poor box by October 1, next he will not record a criminal conviction.