‘Learn from past to be better citizens of present’: new Mayor of Limerick 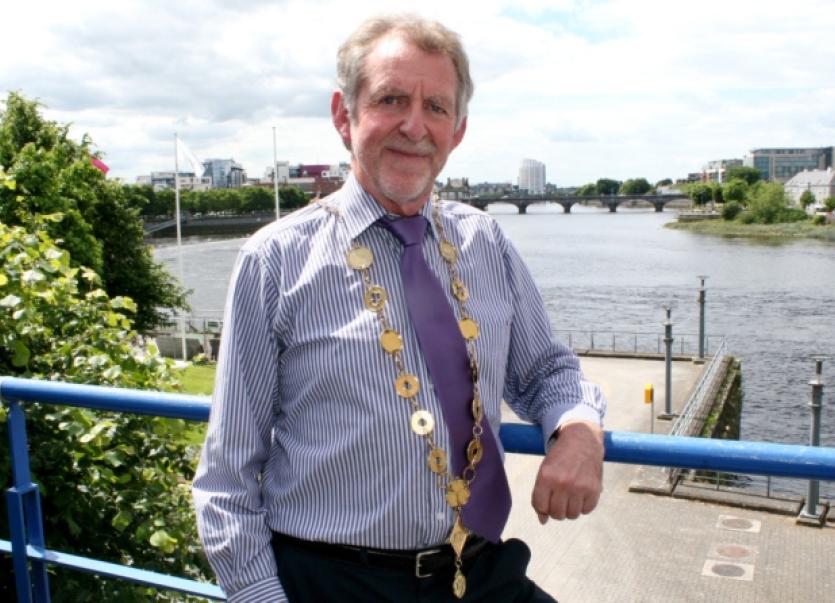 NEWLY elected Mayor of Limerick Michael Sheahan has pledged to be a “figurehead for all classes and all organisations” during his year in office.

NEWLY elected Mayor of Limerick Michael Sheahan has pledged to be a “figurehead for all classes and all organisations” during his year in office.

Monaleen-based Fine Gael councillor Sheahan is the first mayor of the metropolitan city district - but the 818th mayor of Limerick overall after a power-sharing deal was signed with Fianna Fail.

And just a week into his term of office, he has already been busy.

“My first week after the initial nervousness and excitement has been absolutely wonderful. I tend to be a very outgoing person: I am on the street a lot, and a lot of people have come up and congratulated me. My first port of call was within the hour of being elected was to go to Southill and attend a turning of the sod ceremony for the new La Cheile school,” he said.

Many of Mayor Sheahan’s 817 predecessors have been known for attending functions and standing in for photos.

While this is part of the package when one becomes the city’s first citizen, Mayor Sheahan wants to be remembered for far more than this.

“You only have one chance at this job, so you have to give it your best shot. You often talk to past mayors, and they will tell you about how many functions they will have been to. I want to be remembered as being visible - but not only visible for attending functions. I want to be visible in putting in place the opportunity to work with people to be able to encourage the projects in their communities; to develop the projects in their communities, and to develop their individual projects,” he said.

Born in 1951 in Askeaton to Southern Chemicals worker John Joe and Eileen Sheahan, Mayor Sheahan attended St Mary’s Secondary School, where he was two years behind director of the National Museum of Ireland Dr Pat Wallace.

“It was a tremendous place. The big thing in those days was if you were not going to be a teacher, you would work for the local authority, or be a civil servant, or work for the semi-state sugar company”.

Born into a working class family, politics was always in Mayor Sheahan’s blood - his father’s staunch association with the local Fine Gael branch did for that. The first book he read outside of school at the age of 14 was Tim Pat Coogan’s biography of Michael Collins.

“From that age, he had me marking registers as a Fine Gael agent in the polling stations in Askeaton. I used to also attend all the meetings in West Limerick, in Ballingarry, for example,” he said.

When Cllr Sheahan got his first car, there was no doubt what one of its key uses was going to be: “My main job at election time was to return back to Askeaton on the day of election to bring back what would be considered Fine Gael supporters. While all that was going on, my father was standing outside the polling station looking after the Fine Gael ‘product’. The late Michael Sheahan - [Cathaoirheach] Kevin Sheahan’s brother - was looking after the Fianna Fail voters. Isn’t it amazing that more than 40 years later, here we are, full circle?”

Although Fine Gael are traditionally a centre-right party, Mayor Sheahan believes he has always been a “left of centre” person, a stance which has kept him close to communities.

This comes from his father John-Joe, who was “a bit of a mix”.

“My father came from the blue-shirt side of Fine Gael, and showed me knuckle-dusters that he had which he used to defend Willie Cosgrave when he was speaking in Newcastle West. At the same time, he was running union affairs in the local factory,” he explained.

As he moved towards adulthood, Mayor Sheahan was called to Mary Immaculate College to train as a teacher. He was in only the second class to graduate from the South Circular Road facility.

It was after this, he started his “first and only job” at Monaleen National School.

The seventh teacher on staff, the mayor worked there from July 1972 until the summer of 2007, rising to the role of deputy principal.

“In my second year, I will always remember, Limerick won the All-Ireland hurling. The cup was brought to the school, and we thought it would be the start of a great era for Limerick hurling. Éamonn Cregan and Mossie Dowling brought the cup to the school,” he recalled.

For about a decade after graduating, he lived back at home with his parents in Askeaton. But Mayor Sheahan did move to Monaleen, an area he has become synonymous with. In 1983, he married Trish.

Mayor Sheahan was not elected to Limerick County Council until 2009 - but he could have been on the council as early as 1985.

Unfortunately for him, he missed out on the Fine Gael nomination by a single vote.

“When Michael English was retiring, it left Paddy Hourigan as the only Fine Gael councillor in the area. It was the year Mary Jackman first run. I put my name before the convention as well, and I was beaten by just one vote,” he said.

After the disappointment of missing out, Cllr Sheahan put politics to one side, and switched his attention to community work. He has been the president of the Community Games, and chairman of Monaleen GAA.

“I became embedded in the community life of the parish of Monaleen. I became involved in Community Development Associations, the Community Games and business groups. It went hand-in-hand with my teaching,” he said.

A decade ago, Mayor Sheahan returned to the political fold, as the director of elections for the now Fine Gael TD Kieran O’Donnell.

He said: “I had always kept a friendship with Tom O’Donnell. At one stage, he said Kieran was interested in running for the council. He asked if I could become involved with him and help him. Each election I have been with, he has been successful”.

In 2007, Mr O’Donnell was elected to Dail Eireann, and it was anticipated that Cllr Sheahan - given the fact he was from the same area as the TD - would be co-opted to his seat. However, Mayor Sheahan missed out to the then constituency chairman Leo Walsh. However, he did not have to wait for long: upon his retirement from teaching later that year, he switched his attention solely to representative politics. And in 2009, he was re-elected off the back of a surge in support for Fine Gael.

Of course, he retained his seat in the election just gone to guarantee his elevation to the mayoralty.

This year’s mayoral election was stripped of the usual pomp and ceremony that comes with the occasion, leaving many councillors disappointed. The traditional robes of office are locked away in the museum, and the powers of the mayor are subordinate to Cathaoirleach Kevin Sheahan.

Despite this, Mayor Sheahan feels a strong sense of history on his shoulders.

“It is very important we don’t throw out the baby with the bathwater. There are two constituencies here: the people of the city who love to see their mayor coming to their communities. There is a traditional association all over the world - they go hand in hand: the mayor and the city, plus the duty, functions and the historical connection which comes with being a mayor. The tradition has to be respected and appreciated,” he said.

Like many councillors, Mayor Sheahan did regret the lack of decoration in City Hall for the first mayoral election, saying: “It was only afterwards, it really hit home to me that we should not be abandoning our history so quickly.”

“That connect that is there between our people, our councillors and our traditions must be maintained, because we must give our children a sense of our past. We learn from the past to be better citizens of the present and the future,” he continued.

He is also keen to ensure the mayoralty is not downgraded, stressing “My chain will always be with me”.

The mayor is hoping for at least one ‘legacy event’ during his term of office - and he is hoping that it will be one that will bring all the councillors, and the people closer together.

“I would like to see us portray our Irish culture in music, song and dance. With this in mind, I know that within my fellow councillors, there is a great skill in music. There are councillors who are traditionally musical. There are young councillors who are very fluent in the Gaeilge. There are some councillors very good at organising things, and have offered me these skills. I would hope in my term of office to have at least one night of musical traditional Irish extravaganza here in the city of Limerick, where the councillors will lead the show,” he says.

He hopes top set up a ‘cabinet’ of councillors to organise such an event.

Not surprisingly, traditional music forms the basis of Mayor Sheahan’s pastimes and hobbies.

“I have a bodhrán which I am hoping to upskill a little bit in! The problem is when you practice it, that it makes a noise where the neighbours would be concerned, so maybe after hours, when the staff have gone home, I should practice,” he laughed.

Cllr Sheahan also has a great interest in sports, following Limerick FC, Munster and of course the county’s hurlers and footballers.

Asked how he felt to be the 818th mayor of Limerick, Cllr Sheahan was not understated.

“When you look back and see only 800 people have been mayor in the life of the city, it makes me immensely proud. You become a councillor and only a certain amount of people are mayor. I am proud, honoured, and delighted,” he concluded.