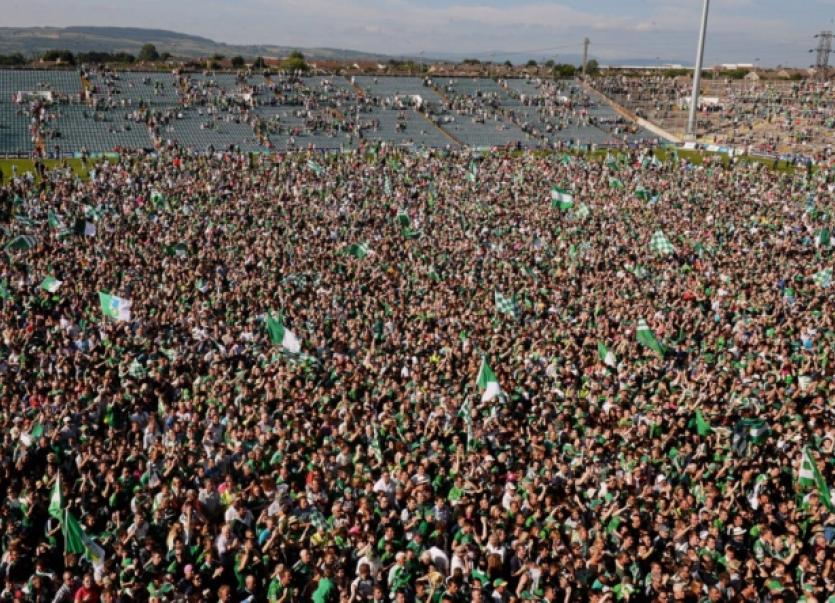 TALKS are under way to erect a big screen in the city to broadcast the Munster Senior Hurling Final to fans in Limerick.

TALKS are under way to erect a big screen in the city to broadcast the Munster Senior Hurling Final to fans in Limerick.

With thousands to miss out on tickets to the July 13 showpiece at the reduced capacity Páirc Uí Chaoimh in Cork, the council and the County Board are planning to team up to broadcast the game live on a big screen - either in O’Connell Street or at the Gaelic Grounds.

The Limerick Leader has learned that the local authority has been sounded out by the County Board on planning issues around erecting a screen in quick order at the Gaelic Grounds.

Mayor Michael Sheahan says he is “99% sure” fans staying in Limerick will be able to gather to watch the game.

One of the previous occasions a big sporting event was shown on big screens in Limerick’s streets was Munster’s 2008 Heineken Cup triumph.

And it is thought that the success of this - particularly in terms of inspiring the team to victory - could see the city centre win the day.

As well as the Limerick vs Cork senior final, it is hoped to braodcast the minor hurlers game against Waterford.

Mayor Sheahan said: “I am supporting, by any means possible, any venture which will bring the game to the people. I don’t care where it is: the Gaelic Grounds, or in O’Connell Street.

“But every effort has to be made. Especially when there are two teams involved, the minors and the seniors.”

He warned that time is of the essence, with the final in less than two weeks. “My officials here have reassured me they are only too willing to enter into talks. But it has to be sooner rather than later because of the planning, and the fact is the gardai will have to be involved,” Mayor Sheahan said.

Last year, Limerick GAA received the go-ahead to stage music concerts at Pairc Na nGael for the next four years. Screening the game could potentially be seen as a dry run for when - and if - gigs take place in the northside stadium.

However, Mayor Sheahan argued that it could potentially cost a lot more in terms of stewarding and security to open the stadium, which holds up to 50,000 people.

He also argued that screening the game in the city centre would represent a big boost to hard-pressed traders.

Between 5,000 and 10,000 Limerick fans are expected to head down to Cork without tickets.

There will be no public sale of tickets, with passes for the big match only available from clubs.

This is in stark contrast to last year’s Munster decider in the Gaelic Grounds when at least 25,000 Limerick fans witnessed the Treatymen’s win.

This time, Limerick look likely to get an allocation of no more than 12,000 tickets in Cork.