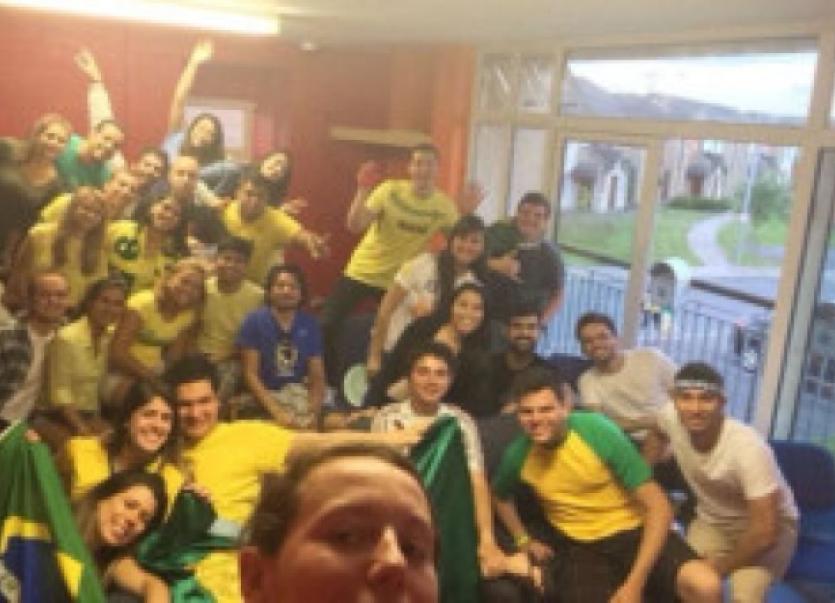 BRAZILIAN students in Limerick who took a ‘selfie’ while watching their team in action at the World Cup received a surprise - when it was shared by the country’s president!

BRAZILIAN students in Limerick who took a ‘selfie’ while watching their team in action at the World Cup received a surprise - when it was shared by the country’s president!

Around 30 students from across Brazil are on an English language summer study camp at the Limerick Institute of Technology.

At half time of Brazil’s game against Cameroon - which the Samba Boys won 4-1 - international officer Niamh Kavanagh suggested the students take a ‘selfie’.

And within hours of it being uploaded onto social media site Facebook, it was shared by President Dilma Rousseff.

Her official Facebook page recorded ‘Fan Moments’, and focused on the students in Limerick.

The president - who has more than 600,000 followers - wrote: “Students of Science without borders at Limerick Institute of Technology, Ireland”.

Niamh said: “It was just a spur of the moment thing. We put it up, and within hours, the Brazilian president had shared it on her own Facebook page.”

When she came into work, the following day, she was told by the excited students that President Rousseff had shared the snap.

“It is great for the students. They are taking a lot of interest in the World Cup for obvious reasons! It is great the president herself has shared their pictures, and kept an eye on how they are progressing,” she said.

Niamh said the students are “absolutely delighted”, and “are going around saying they are famous in Brazil now.”

Brazil remain on course to win the World Cup on home turf, with a quarter-final against Colombia this Friday night - and naturally the students remain confident, despite only squeezing past Chile on penalties.