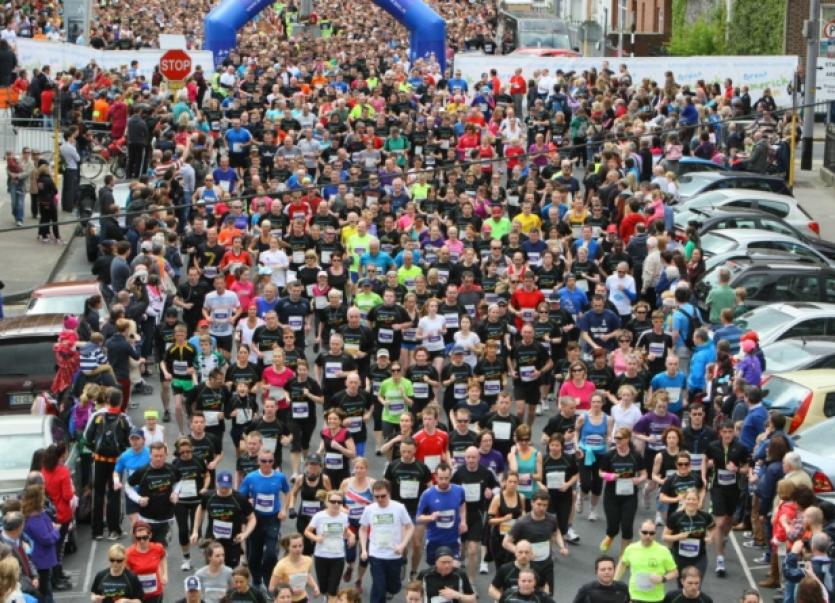 A RECORD 12,000 will take part in the Barrington’s Hospital Great Limerick Run this year, across six events.

A RECORD 12,000 will take part in the Barrington’s Hospital Great Limerick Run this year, across six events.

Race director John Cleary, who established the event five years ago, said they are on target to have a record 12,000 participants taking part this year across all categories - along with the ambitious aim to donate over €200,000 to the Special Olympics from proceeds of the race entries.

This year’s event expects to see 2,000 children take part in the Kids Fun Run, 1,000 marathon runners, over 2,000 people undertaking the half-marathon, over 100 relay teams, and over 6,000 people doing the most popular event, the 10km route around the city over the May Bank Holiday weekend.

The race has already attracted entries from the UK, US, Italy, France, Holland, Denmark, Luxembourg and Spain, with a large contingent from Chicago travelling to Limerick this year.

“We have several high class runners from Kenya competing in the marathon this year, who hope to break the sub 2.20 time. Currently the record in Limerick is 2.22 and in Dublin it was 2.18, so it would be great to see a new record in Limerick, ” said Mr Cleary. This year a new addition to the race is the fittest company challenge, which could see over 100 companies from Limerick and across the Mid-West to claim the title.

Fifteen bands, solo acts and Djs, from the Boherbuoy brass band to gospel, reggae and jazz, have signed up to entertain and lift the spirits of runners along the route.

Free running clinics are up and running twice weekly in the city. On Wednesday nights there is interval training at the track in Mary Immaculate College from 7pm.

On Saturday mornings, a group leaves Scott’s bar from 10am for a five or 10 mile run. All are welcome to join the group and do not have to pre-register.

“The group mentality really encourages more people to get involved and keep up their running, and we’re seeing people from all over the county travelling in for these clinics, ” he said.

The inaugural Kids Run for Fun last year has been widened this year. Run in association with Limerick’s Sports Partnerships and the Health Service Executive (HSE), it attracted 1,450 children between the ages of 5-12 years in two runs last year.

This year the kids run will take place at the UL Sport Arena Campus on Saturday, May 3. It will be broken into four wave starts - wave 1: junior and senior infants 1km, wave 2: 1st and 2nd class 1.5km, wave 3: 3rd and 4th class 2km, wave 4: 5th and 6th class 2.5km, wheelchair athletes will complete the relevant distances on the track.

The Expo will be held on Saturday this year - rather than being held over two days - at the University of Limerick Arena, attracting an estimated 15,000 people.

Up to 800 volunteers will also be needed on the day. “The run could not go ahead without the amazing support of the local community in Limerick on the weekend of the event, ” said Mr Cleary. “We are looking to get volunteers for a number of sectors of the event. Volunteers are required for the day of the race as well as at our Expo event, ” he said. To register log onto greatlimerickrun.com

Places for the children’s entries can also be booked online.