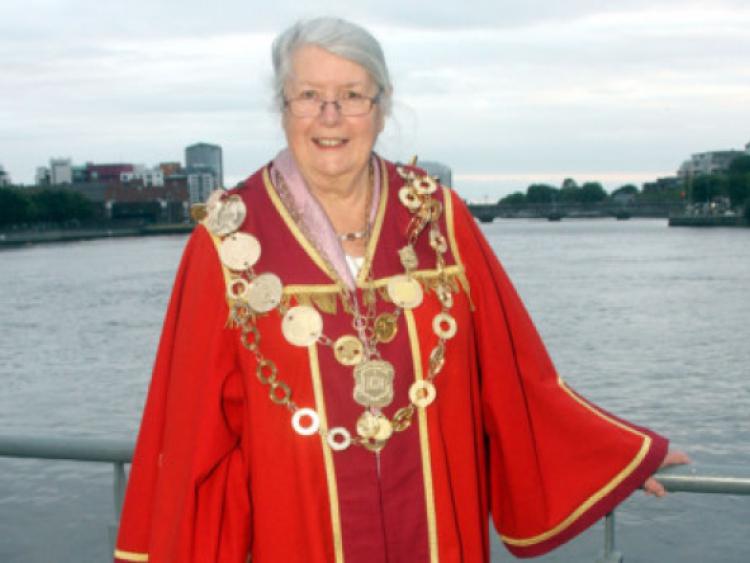 MAYOR Kathleen Leddin has confirmed she will not be standing at the local elections.

MAYOR Kathleen Leddin has confirmed she will not be standing at the local elections.

North Circular Road councillor Leddin said she is to step aside after securing election to City Hall in 1999, 2004 and 2009.

“I have decided against it. It is time to retire, and do something else,” the 74-year-old mayor told the Limerick Leader.

The northside Independent councillor is the 817th first citizen of Limerick, and will be the last mayor of the city before the two councils are amalgamated.

“Being elected mayor in any year would have been special, but in the year we are having, it is extra special, because it is the year of the amalgamation, and the year of City of Culture,” she said, “I have enjoyed every moment. Every moment has been very special.”

Asked for her highlights, Mayor Leddin cited the spectacular opening of the City of Culture on New Year’s Eve, and the more low-key commemoration of Remembrance Sunday at Pery Square.

She said she has given a lot of thought to her retirement. “A lot of people had encouraged me to stand again. But I have done 15 years, and it has been enjoyable,” she said.

The mayor replaced her late husband Tim Leddin on City Council in 1999.

Although she insists she will remain a community activist on the northside, she will miss having a front-line role in politics.

She said: “I will miss having a say in things that are happening in Limerick in terms of planning, and environment. I won’t have any input into this, but I hope I will remain an activist. I guess you could call me an emeritus politician.”

Mayor Leddin will still attend the first meeting of the new City and County Council as she will have to hand over the chain of office to the 818th mayor of Limerick.

She says being the last mayor of Limerick as it stands is a “huge source of pride to her”.

Cllr Leddin was elected mayor of Limerick in dramatic circumstances, following the breakdown of a pact between the two dominant parties at City Hall, Labour and Fine Gael.

Fine Gael councillor Denis McCarthy had been in line to be mayor.

But Cllr Pat Kennedy –then of Fine Gael – voted in favour of Cllr Leddin as a protest at not receiving his party’s nomination for a third mayoralty.

He was joined by Labour councillors, delivering the top job to Mayor Leddin at the fifth time of asking, after being a perennial runner-up.

As for Cllr Kennedy, he says he has yet to decide whether he will run again. Cllr Pat Kennedy, a permanent fixture on Limerick City Council for over 40 years, said this week that while supporters had been encouraging him to seek re-election in Limerick City West his family would “prefer for me to call it a day”.

The enlarged electoral area held no fears for him, Cllr Kennedy said, as many of his supporters from the old ward four were now living in the Raheen and Dooradoyle areas.

Cllr Kennedy was re-elected as an independent candidate in 2009 but rejoined Fine Gael as part of a pact that ought to have delivered him the mayoralty during this term. He left Fine Gael after this pact fell apart amid party infighting.

Meanwhile, Sinn Fein has selected Malachy McCreesh to run in Limerick City West. Mr McCreesh, a long-time resident of Dooradoyle, is a brother of the late Raymond McCreesh, one of the IRA hunger strikers who died in the Maze prison in 1981.