County Limerick Tidy Towns committee up in arms over posters 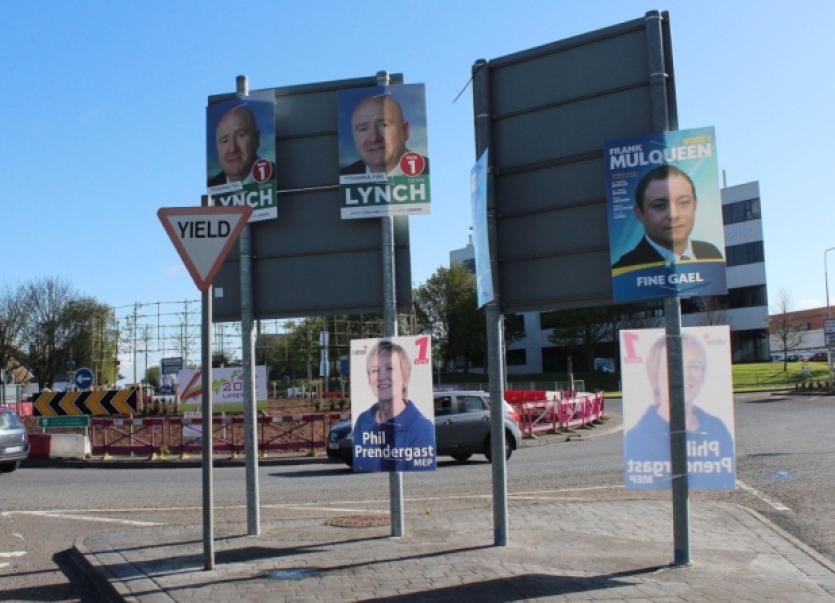 They may have just gone up but up but election posters are fast becoming a bone of contention in Newcastle West.

They may have just gone up but up but election posters are fast becoming a bone of contention in Newcastle West.

Just hours after local sitting councillors agreed to renew a voluntary ban on posters in both Newcastle West and Abbeyfeale, other candidates began putting up their posters to the great dismay of the Newcastle West Tidy Towns Committee.

“I went to bed last night and there were no posters but woke up this morning to find them on every pole,” Ron McCoy, the chairwoman of the Tidy Towns Committee said on Wednesday.

And she described them as an eyesore. “We have had a no-poster policy and it has worked very well,” she added. And she is horrified that this policy has been breached. “If they are not removed, I will cut them down myself,” she warned. “They are obstructing the hanging baskets and the baskets get priority.”

But she appealed to all candidates to respect their no-poster policy.

Over the past number of years, at election and referendum time, local political representatives have taken the wishes of the Tidy Towns committee to heart and adopted a voluntary ban.

But at Tuesday’s meeting of Limerick County Council, a number of councillors wanted to know if the ban still stood. “I am happy not to poster if the other four sitting councillors support me,” Cllr Michael Collins said. But he added: “We can’t control what other candidates do.”

Cllr Damien Riedy called the ban a “gentlemen’s agreement” and said he too would abide by it.

But, he stressed that they could not force that ban on other candidates. That, he said, would be undemocratic.

Once it became legal for election posters to go up at midnight on Tuesday, posters for Anti-Austerity Alliance candidate Joe Harrington and Independent candidate Christy Kelly were put up in Newcastle West.

Mr Harrington told the Limerick Leader he only became aware of the voluntary ban this Wednesday when contacted by someone from the county council. “Within half an hour I had the posters down,” he said.

But he was not aware, nor was he told, of any ban in Abbeyfeale. “In all fairness, candidates should have been told in advance,” he said. He added that while the ban would save money on posters, the bigger parties would put money into bill-boards which his group could not afford.

Labour candidate Stephen Goulding said he hadn’t put up any posters in Newcastle West nor did he intend to do so. “I fully recognise the work the Tidy Towns Committee has done,” he said.

Independent candidate Christy Kelly said he was not asked to respect the voluntary ban and no-one told him it was going to be extended to this election. “Why didn’t they tell me?” he asked. “They all know I am a candidate.”It would have been easier for me not to put them up,” he continued, revealing that he had been out shortly after midnight on Tuesday putting them up. “But I will take them down.”

Separately, concerns have been expressed that some posters, which have been erected close to busy junctions or pedestrian crossings, represent a danger to road users.

Major roundabouts across the city have been plastered with election posters since Wednesday.

“You must maintain clear lines of sight for road users, you can’t interfere with the users of a road so posters, for example, can’t be put on road signs or to obstruct a road signs or at traffic junctions or near roundabouts where they would constitute a road safety risk,” he said.

By law, election posters can only be erected 30 days before polling day, which means any posters erected before midnight this Wednesday were in breach of the regulations.

A spokesperson for Limerick City and County Council confirmed that proceedings may be brought against candidates whose posters were put up too early, with a possible penalty of €150 per poster.