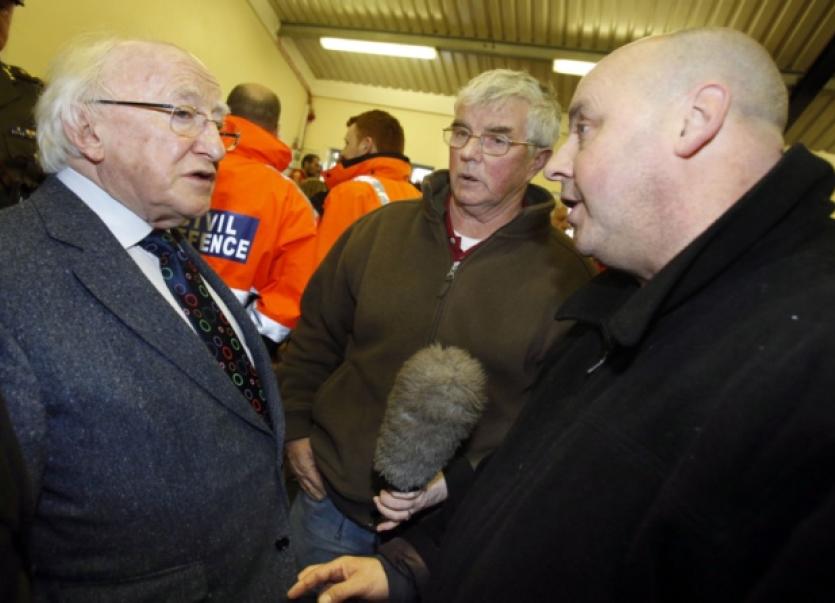 PRESIDENT Michael D Higgins has appealed to government to “follow through” with long-term support for residents of St Mary’s Park and other parts of Limerick left devastated by floods.

PRESIDENT Michael D Higgins has appealed to government to “follow through” with long-term support for residents of St Mary’s Park and other parts of Limerick left devastated by floods.

On a morale-boosting visit to King’s Island on Monday, the president paid tribute to the immediate emergency response and consoled flood victims.

He was encouraged to see relief programmes and future flood defences were top of the agenda at today’s cabinet meeting but communities like St Mary’s must remain a priority in the weeks and months ahead.

President Higgins said he had come to his native city “to make an appeal that it not be the response of a short period or a moment - but that people make a commitment to following through now with the families”.

“It was very sad to see places where significant progress has been made in giving people a lift (through regeneration) to have to face a setback but the resilience is everywhere and even those most affected, with tears in their eyes, are saying they are not going to be defeated by this and we should assist them in every way possible.”

“I was glad to read that the cabinet meeting tomorrow will have as its principal item responding to flood and flood relief and also looking into the future and protection.”

The president made his remarks during a visit to King’s Island Community Centre, which is still providing meals to flood victims and to volunteers involved in the clean-up over a week after the River Shannon swamped large areas of the Island.

He also called in on St Munchin’s Community Centre, which has provided crucial support to its neighbouring parish.

President Higgins singled out ordinary residents like Ger Hogan, who carried around 200 people out of the floodwaters on his horse and trap last Saturday.

“What is even more

impressive is the people who have good ideas; who use every resource that they have to respond in solidarity to the needs of their neighbours. Sometimes that requires clever professional skills and sometimes it means moving with your heart and your mind, for example like Gerry and his trap and his horses,” the president said to rich applause.

“It is only when you meet the families and people directly affected as I did when I went around the room that you can have any sense of how distressing it has been...it isn’t just possessions you are losing but things you have invested life and intimacy in and that are full of memories of children and of many generations. Therefore it is enormously sensitive and even difficult for the services who have been so wonderful in responding to be able to say to people what you have to leave behind or tear up in the interests of safety.”

But he had no doubt St Mary’s would rise again, he said.

“We must not think we are looking at people far away from us whose livelihoods and whose homes have been wrecked. They are our fellow citizens and may the response in Ireland be generous; may it be professional; may it be adequate and may we do the best to make sure that there will be a better future and better days and better evenings and better nights for all of the people who have shown such great courage, fior misneach, in rebuilding and restoring their lives and their homes.”