Over €11,500 received in special fund for Limerick flood victims 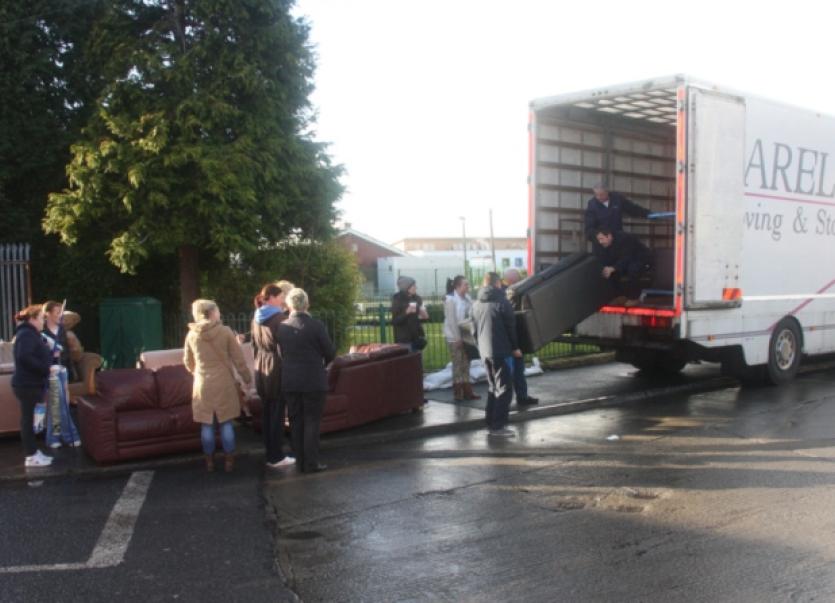 OVER €11,500 in aid has been donated from people across the country to the victims of flooding in Limerick city, which witnessed the worst flooding the country has ever seen a fortnight ago.

OVER €11,500 in aid has been donated from people across the country to the victims of flooding in Limerick city, which witnessed the worst flooding the country has ever seen a fortnight ago.

A special relief fund was set up by St Mary’s Aid in the north-side of the city on Thursday last, and within six days, donations of some €11,500 and counting continue to pour in.

Ger Garvey, manager of St Mary’s Aid, said in recent days they received one sizeable donation of €5,000, and overall €3,000 has been set aside in the fund for general cleaning of homes, and dry-cleaning of clothing.

“We hope it will increase as time goes on. It is a legitimate and safe fund. Any money donated will be spent properly,” he assured.

He said their community cafe is still cooking and delivering some 260 meals a day, seven days a week, and “will do so for as long as it’s needed.”

Mr Garvey urged volunteers to come forward, even if they only have a few hours to spare, especially those with cookery experience.

Two weeks on, dozens of people in the sprawling estate are still unable to live in their homes due to the extent of the damage caused, while those left behind and refusing to leave fear that their homes will become targets for robbery and vandalism.

Hundreds of people are still volunteering to help those afflicted - among them Christy Keane, 53, who helped organise the delivery of over 20 second-hand beds and 20 three-piece suits on three trucks from Carey’s Furniture to give to residents whose homes.

The former St Mary’s Park resident told the Limerick Leader: “I’m just down here helping my neighbours. Carey’s obliged us so much. Within 24 hours, look what they’re after doing for us - they have given us all this free of charge, which we’re more than grateful for. We couldn’t ask for better than that really could you, when we’re in dire straits”.

Pat Carey, of Carey’s Furniture in Limerick, said while the furniture delivered is second-hand, it is in good quality.

“We have surplus furniture from people who leave the country; they ask us would we like to dispose of the furniture and we hold it until we come across clients who are looking for bits and pieces, and give it to them.

“We went through a lot of our old stock, and who else can you give it to only one of our own,” said Mr Carey, of Carey’s and Careline furniture removal, which has been in business for over 100 years and is now in its fifth generation.

The company, which has outlets throughout Ireland and the UK, scanned their storage unit in Annacotty for suitable items after receiving a call from one local volunteer to assist the community.

Pat O’Sullivan, of Limerick FC and Galtee Fuels, said they have delivered 100 tonnes of sand free for the council, along with five tonnes of coal to warm people’s houses, especially for those without central heating.

“These are our own people and we should all be in this together. What’s going on here is deprivation, and as a community we should be helping each other as much as we possibly can.

“We’re trying to make sure the fuel goes to the right people. There’s nobody going to be left short. We’re here voluntarily to help the community, and maybe it’s something we should be doing more of in Limerick, and it might be a better community more it.

“It comes to the surface on an occasion like this, but maybe it should be there a little bit more on a daily basis.”

The Bishops of the Catholic and Church of Ireland dioceses of Limerick have also called for the public’s support to assist the people of St Mary’s parish in the aftermath of the flooding that has affected hundreds of residents.

“Minister Brian Hayes [of the OPW] said this is the worst flooding he has seen in the country and there is an acknowledgement that no community has been worst affected,” said the Bishop of Limerick, Brendan Leahy.

“People’s homes are not liveable, they have huge amounts of personal belongings destroyed and, in an area with significant socio economic disadvantage, this has hit really hard. It is incumbent on all of us to do what we can,” he said.

Bishop Trevor Williams said “it is a terrible experience to watch your home being destroyed, knowing that you can do absolutely nothing to stop it. This has been the experience of so many residents of King’s Island recently”.

The monies from the fund will go towards providing provisions such as food and fuel, clothing and bed clothing.

This separate fund will be administered though the parish in association with the Society of St. Vincent de Paul, which will also receive a direct contribution from the Catholic Diocese of Limerick and the Limerick Social Service Council.

Donations can be made by cheque, payable to St. Mary’s Parish - Flood Relief Fund and given to local parishes who will forward it to St. Mary’s Parish. Alternatively, they can post cheque to St. Mary’s Presbytery, Athlunkard Street, Limerick. People can also donate through their bank to the relief fund account at the Allied Irish Bank, Raheen, Account No. 82611088, Sort Code 93:52:47.