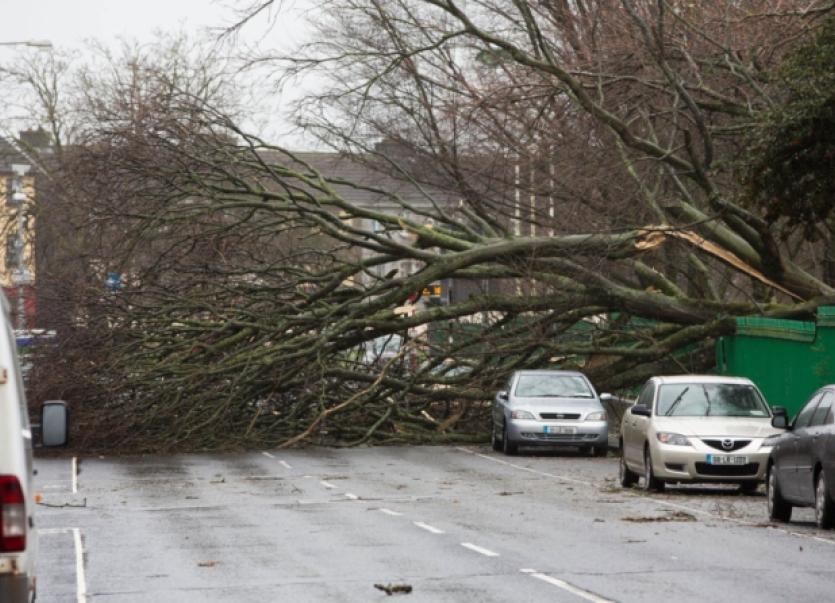 Limerick was battered by winds of up to 160 kmph this Wednesday in what many described as the worst storm in living memory.

Limerick was battered by winds of up to 160 kmph this Wednesday in what many described as the worst storm in living memory.

Roads were made impassable as trees were uprooted by the violent gusts, while several buildings in Limerick city and county were badly damaged. At least two trucks were overturned as a result of the high winds. The ESB estimates that between 25,000 and 30,000 homes in Limerick were without power, with many of these not expected to be restored until later this Thursday.

In the city, “severe damage” to cables and infrastructure was reported in Raheen, Dooradoyle and Corbally. Castletroy was also badly affected by power outages, with Cook Medical one of the businesses who opted to send staff home.

In the county, among the worst affected areas were Patrickswell, Adare, Foynes and Croom which were almost completely without power; Rathkeale, where over 3,600 residents were affected; as well as Kilmallock (1,700) and Newcastle West (1,300).

While there were no reports of serious injuries, a council worker was hurt when he was hit by a falling branch near Annacotty. A number of people were taken to Limerick University Hospital with minor injuries, including 14 people who arrived by ambulance during the afternoon. All elective surgeries due to take place in the hospital this Thursday have also been cancelled.

Shannon Airport was closed on Wednesday afternoon due to the high winds, with one plane tipped over on its wing by a strong gust. Operations resumed at about 4.30pm once the winds had died down.

Bus and train services in the city were also cancelled, as were intercity expressway services.

In Limerick city, the roof was blown off the historic Shannon rowing club boathouse, while trees were uprooted in the People’s Park and blown through the railings.

A woman in the top floor above O’Sullivan’s pharmacy on Sarsfield Bridge was evacuated after part of the building collapsed. The Crescent Shopping Centre in Dooradoyle also closed as did the Strand Hotel in the city centre. “It was the worst storm I have ever seen in my lifetime. We have had to lock down everything in the hotel,” commented manager Sean Lally.

There were over 40 trees down in the Bruff district according to Gardai, with local people reporting seeing slates flying down the street in Kilmallock.

In one terrifying incident, a school bus carrying 50 children from Kilmallock to Bruff had to get a garda escort as it was battered by flying debris.

For more on this story, see the print editions of the Limerick Leader, in shops now