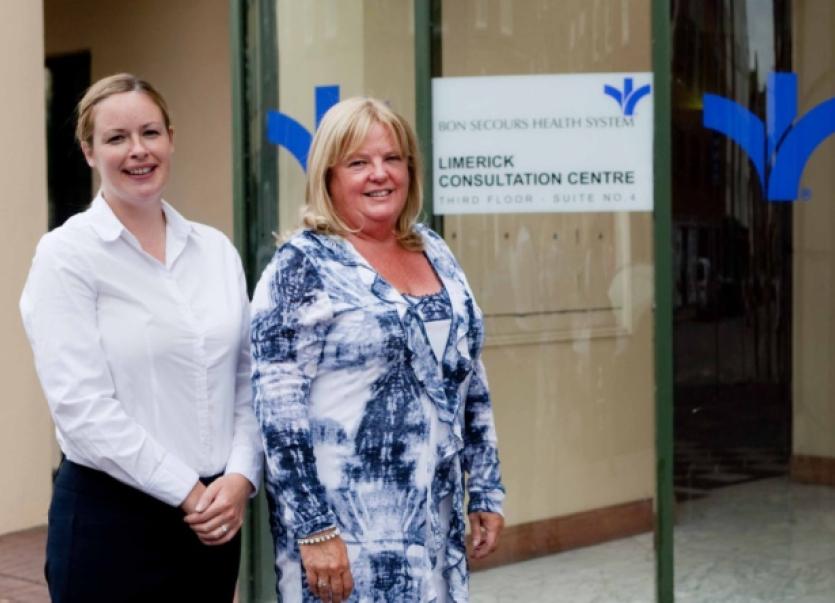 A new consultation centre has opened in the centre of Limerick city to help alleviate some of the pressure on existing medical services in the region.

A new consultation centre has opened in the centre of Limerick city to help alleviate some of the pressure on existing medical services in the region.

The Bon Secours private hospital in Tralee - one of the largest in the country - has opened a new clinic in Limerick city to meet the demands of patients travelling to Kerry to avail of their services.

The new office is based on Henry Street and offers consultation in most major medical specialities.

Manager Donna Roche explained that the hospital had seen an increase in the number of patients travelling from Limerick and the wider region to Tralee and said the new centre would “help to reduce the stress for existing and new referrals”.

Doctor to the Limerick hurling team, James Ryan, is a consultant in Bon Secours and has been holding regular clinics in the new centre since it opened a number of weeks ago.

“The hospital came to me on this a couple of months ago and asked me to get involved and I said I would, and I am delighted as a Limerick person obviously,” explained Dr Ryan, from Bruff, who is a consultant specialising in endocrinology.

“I think it is very good thing for the area as well, we are under pressure in Limerick for services. The Regional is a great hospital and does a great job, I was in there on Sunday evening with two of the lads after the match. But they are under huge pressure and if there is some way that we can help with local services, then it is great,” he explained.

Ms Roche outlined that three new consultant doctors have recently been appointed to fill a number of key medical roles in Bon Secours and they are “looking forward to travelling to the consultation centre in Limerick on a regular basis”.

Dr Ryan feels that the centre can help people struggling with already expensive medical care to reduce their travel bills at least.

“It is in a good city centre location, easy to get there,” he explained.

“A lot of the thing I do is hormones and diabetes and stuff and for a lot of those you don’t necessarily need to be in a hospital for, people might be changing medication or consult about weight loss, fertility or hormone problems.

“The last week I saw a young kid with a thyroid problem and they were having trouble getting access to services, so it is great from that point of view.

He continued: “I have patients from Clare, North Tipperary, Limerick. It is a long distance to travel, so we can assess people and if they need to go to hospital, well and good, we can bring them back here, but if they can avoid it, all the better for them rather than travelling the extra miles, if they can get it done in Limerick then well and good.”

“The other thing is that most of them working up there are similar to myself, I suppose the younger age consultant who might be - and I am not criticising anybody - maybe a bit less formal and I have no problem with people emailing me or ringing me. Easy access is probably a good thing,” he added.