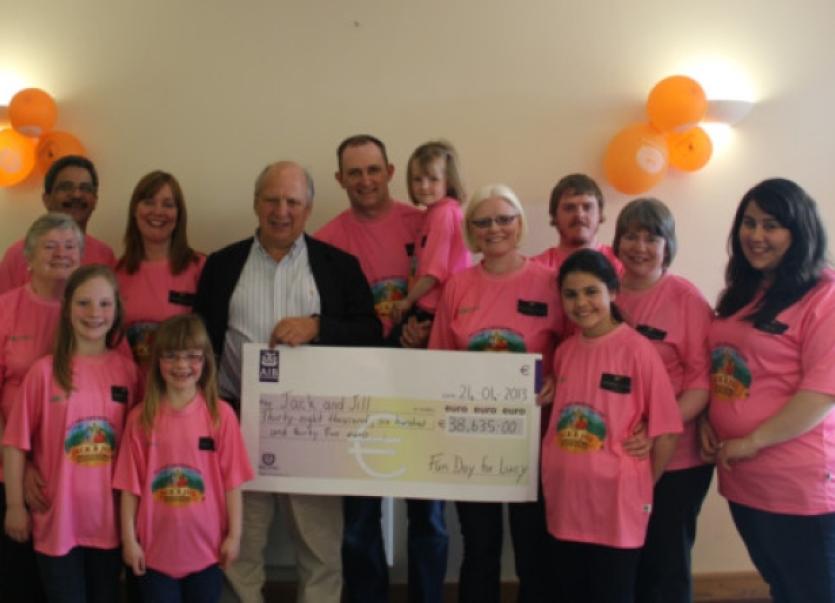 THE family of a County Limerick baby who sadly passed away at just nine weeks after being born with a rare condition, have raised almost €40,000 for the Jack and Jill Children’s Foundation who, they say, helped make their little Lucy’s lifetime “absolutely beautiful”.

THE family of a County Limerick baby who sadly passed away at just nine weeks after being born with a rare condition, have raised almost €40,000 for the Jack and Jill Children’s Foundation who, they say, helped make their little Lucy’s lifetime “absolutely beautiful”.

Two weeks after her birth, test results revealed that Lucy had Edwards’ Syndrome - a condition caused by the presence of all or part of an extra 18th chromosome.

Sadly, the syndrome has a very low rate of survival.

Little Lucy was baptised and thoughts immediately turned to making her precious time on earth as happy and peaceful as possible.

It was decided that she should join her mum and dad, Íde and Jim, and big sister Emily, then aged three and a half, at the family home in Castletroy.

“When we decided to go home we were actually frightened,” Íde admitted this week.

“The girls in the neonatal unit had prepared us brilliantly but there was always the fear of being at home without all that wonderful medical support.”

The public health nurse and local GP reassured both Íde and Jim that they would do all they could to ensure that Lucy could live at home.

The couple were introduced to members of the Jack and Jill Foundation who, over the next six weeks, would love and care for Lucy as if she was their own.

On the morning they were to leave the hospital, Íde and Jim met with the coordinator for the region, Mags Naughton, who then introduced them to the nurses who would care for Lucy.

Nurse Ber looked after Lucy for one night a week while nurse Theresa cared for her one or two afternoons in the week.

“I remember lying in bed the first night and saying to Jim ‘I can’t leave my baby downstairs with a stranger’ and the next minute we heard this chatter,” Íde recalled, “Ber was just chatting with Lucy and I eventually just drifted off to sleep. That just gave us the time to get some sleep and get the strength to keep going”.

It also gave the couple time to spend with Emily and do, as Íde puts it, “the silly things like the shopping”.

“When we would leave the house, Theresa would be sitting in the rocking chair with Lucy in her arms. You just knew they loved her and cared for her. They are beautiful people,” said Íde of the Jack and Jill team.

Her home was a happy one where wonderful memories were created - memories that would last forever.

“When Lucy was in hospital we were functioning as two units trying to care for Lucy and Emily whereas at home we were one unit.”

Reflecting on the past year, Íde says she sometimes wonders “how we have managed to stand up straight, how I am back at work and how we have come this far in the journey.

Surrounded by love, Lucy thrived, gazing and smiling happily as her big sister entertained and cuddled her endlessly.

“No memory could be more beautiful than watching your children cuddled up together, smiling.”

And that is how little Lucy left this world at just nine weeks, wrapped in her family’s arms, at home, surrounded by love.

Last week should have been her first birthday.

The week drew vivid thoughts of what should have been but Íde and Jim were determined to organise something positive to mark the day, to mark Lucy’s life and to thank Jack and Jill for their love and support.

The family handed over a cheque of €38,625 to Jonathan Irwin, CEO of the foundation which provides direct funding to families of children who, as a result of their condition, require intensive home nursing care.

The proceeds were raised from the Fun Day for Lucy which took place last March at Deebert House Hotel in Kilmallock which is run by Íde’s family. Activities on the day included a 60/30k cycle, a fun run, walk and buggy push .

Íde’s cousin, athlete Sonia O’Sullivan, who had been at the University of Limerick for the International Women’s Day Conference called out to Kilmallock to take part in both the cycle and the run.

Lucy’s family wish to thank everyone who participated in the event, made a contribution or gave sponsorship. Thanks are also extended to their GP, public health nurse, the neonatal unit in the maternity hospital, the Milford palliative care team and the Jack and Jill Children’s Foundation for their support in caring for Lucy.

“I couldn’t think of a more beautiful way to remember Lucy and to honour an organisation that made her time with us as beautiful as it could be,” said Íde of the Fun Day for Lucy.

“Baby Lucy’s feet may have been tiny, but even the smallest of feet have the power to leave everlasting footprints on the world”.