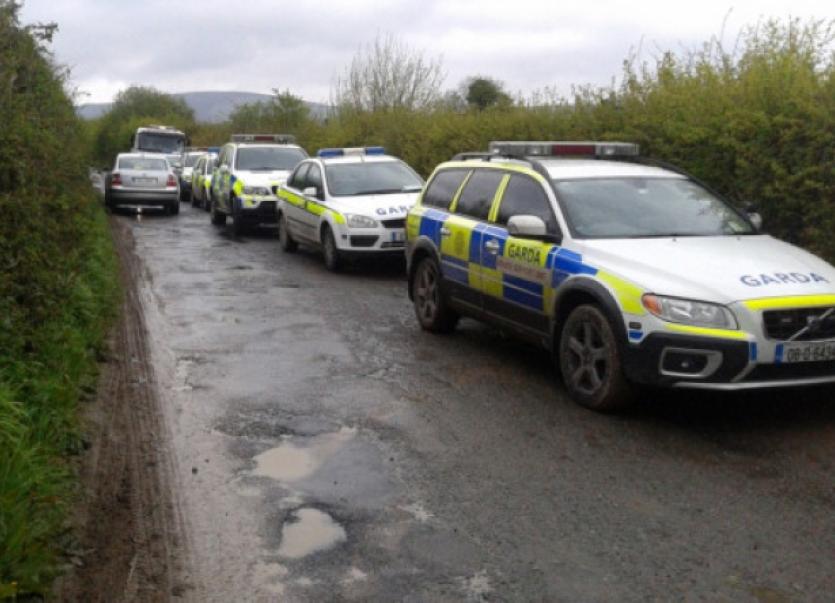 A DRIVER who engaged gardai in a pursuit on narrow roads around County Limerick was found hiding in dense undergrowth a number of fields away from the road outside Newcastle West where he had abandoned the car.

A DRIVER who engaged gardai in a pursuit on narrow roads around County Limerick was found hiding in dense undergrowth a number of fields away from the road outside Newcastle West where he had abandoned the car.

Laurence Kiely was part of a four-man gang of burglars who had struck four properties in County Limerick on May 1, 2012, “under the noses” of gardai who had them under surveillance.

Det Garda Michael Reidy, Bruff garda station, said gardai had been alerted to a suspicious vehicle in the Bansha area of County Tipperary at around 8.30am that day.

Gardai had followed the black Volvo at a distance and the car had “pulled into a number of different houses and burglaries were effected by the occupants of the car” being driven by Kiely, Det Garda Reidy said.

“Mr Kiely would have been identified in the weeks prior as a member of a travelling gang engaged in this type of crime,” the detective told John O’Sullivan BL, prosecuting.

The car was at all times being monitored while the burglaries took place and the Garda helicopter had also been involved in the surveillance operation.

It was at about 1.30pm after the burglary in Martinstown that gardai moved in to intercept the gang. When one of the officers in pursuit activated the blue lights about 1km outside Kilmallock, Kiely had taken off at speed, overtaken a tractor on a blind bend and continued down the wrong side of the road at speeds of up to 120kph, Det Garda Reidy said.

It was in the interests of public safety that gardai had pulled back from the pursuit at that point.

Two pedestrians at Rourke’s Cross had been able to indicate the direction in which Kiely had driven and the pursuit continued towards Newcastle West.

Ten different Garda units were now converging from different directions and the black Volvo was found on a narrow lane near Raheenagh. By that time, a cloned number plate had been taken off the car, Det Garda Reidy said.

Kiely was found hiding in the undergrowth a number of fields away by members of the Armed Response Unit but was uncooperative when arrested and none of his three accomplices were apprehended.

A number of items including walkie-talkies, baby wipes and screwdrivers were recovered in the car.

Gardai had also found a sock in a nearby field which contained jewellery taken from an earlier burglary, Judge Carroll Moran was told.

Seoirse O’Dunlaing BL, defending, said that while his client had previous convictions for traffic offences, including for dangerous driving, there was nothing of this nature on his record.

While he had “relied on his right to silence” while in custody, he had entered a plea of guilty to all matters when he was first brought to court on the charges in December 2012.

Kiely had also brought €1,000 by way of compensation to any homeowners whose property had not been recovered.

Mr O Dunlaing said his client, an unemployed father-of-two, had left school at 16 having failed his Junior Cert. He had worked on and off in Ireland and England but he began to accumulate gambling debts in 2011.

He was “deeply ashamed to be before the court” on the charges set out and the incident had been “a wake-up call”.

Judge Moran said the facts as described by Det Garda Reidy suggested the “planned and systematic” committing of burglaries by Kiely and his accomplices.

He sentenced the accused to a total of three years in jail and disqualified him from driving for 15 years.