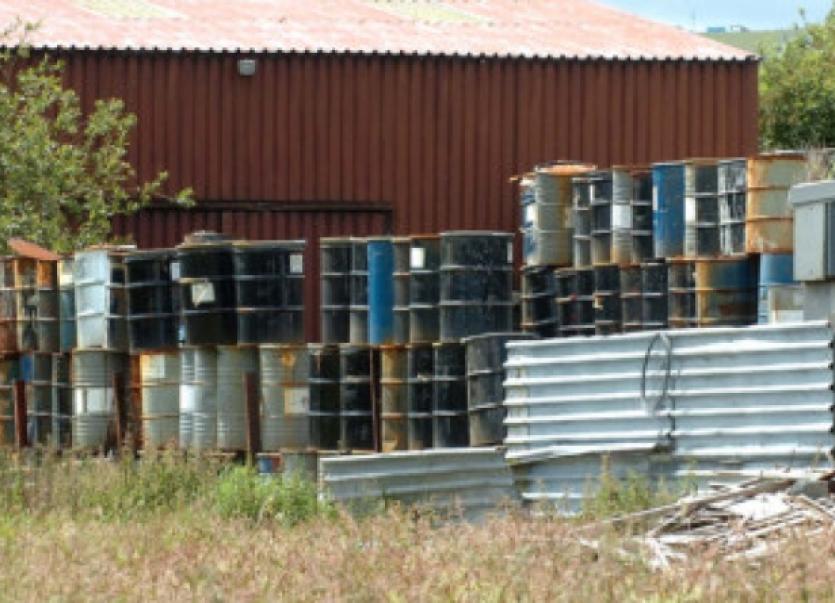 A NEWCASTLE West man responsible for illegally storing hundreds of thousands of litres of paint on his property may be forced to mortgage his land to pay for the clean-up costs, which are now expected to be in excess of €150,000.

A NEWCASTLE West man responsible for illegally storing hundreds of thousands of litres of paint on his property may be forced to mortgage his land to pay for the clean-up costs, which are now expected to be in excess of €150,000.

Sean Keating, 71, of Ballintubrid, Newcastle West was back before the local court in connection with a long-running prosecution for his illegal storage of 1,700 barrels of industrial paint on his land just outside the town.

Mr Keating, who has previously been threatened with a prison sentence over the “chemical dump” which poses a risk to the local water supply, now faces the prospect of having his land mortgaged in order to cover some of the cost of cleaning up the site.

Solicitor Will Leahy, prosecuting on behalf of Limerick County Council, told the court that Mr Keating was “threatened with imprisonment” in March 2012 by Judge Mary O’Halloran, who “ran out of patience” with the lack of progress in “probably the longest standing prosecution in this district”, which dates back to 2006.

However, Mr Leahy said that Mr Keating had “the good fortune” that Judge O’Halloran retired before the case could be finalised. Evidence in the prosecution was re-entered before Judge Mary Larkin, who was told that at the moment there are 1,700 barrels of paint on Mr Keating’s property, which contain up to 220 litres each.

Mr Leahy said that the paint barrels, many of which have been on the land for decades, are “a byproduct” from Mr Keating’s former paint business. Over time, the barrels have rusted away and the paint, some of which is oil-based and toxic, has been seeping into a nearby drain, which connects to the River Arra.

Mr Leahy said that if this “vast quantity of paint” remains on site, it will pose “a long term risk to the environment”.

The court heard that after Mr Keating was originally prosecuted under the Waste Management Act in 2006, he began a process of decanting the paint from the old barrels into new ones.

This temporary work was proceeding “relatively well” until 2009, Mr Leahy said, at which point Mr Keating “ran out of funds”. Mr Leahy warned that while many of the old barrels had been secured and their contents transferred to new ones, if left on site over time these new barrels will decay and rust too.

Sean Nash of Limerick County Council told the court that he visited the site last week and counted 900 old rusted barrels full of paint, which have a capacity of 220 litres each.

He said that the paint in these barrels “had either evaporated, been washed out by rain or solidified at the bottom of the barrels”. However, they are “still a risk to the environment’.

Mr Nash said that the county council had previously made inquiries about how the barrels could be safely destroyed, and how much it would cost.

The court heard that the barrels would have to be removed to Germany for incineration, and that the cost could be as high as €150 per barrel, on top of site clean-up costs of “tens of thousands”.

The court also heard that the county council’s legal fees in the case to date have reached almost €10,000.

Mr Leahy said that recently the “very tentative idea” of the council clearing Mr Keating’s site and paying for it by way of “a mortgage to be placed on his property” had been suggested.

This would, he said, ensure that “at least the public purse could recoup the cost somewhat”.

Mr Nash cautioned that it is unsure how much the final bill could be, as “some barrels could be lifted out by a machine”, while others “would fall apart if you touched them”.

The court heard that the maximum penalty facing Mr Keating is up to a year in prison and a fine of €3,000. Solicitor Kate Cussen, defending, said that Mr Keating has been “anxious to assist” the council throughout this issue, and that to date he has spent as much as €40,000 replacing old barrels and carrying out other clean up work.

When asked by the judge what the value of Mr Keating’s land is, Mr Leahy replied “it probably wouldn’t be €150,000”. Mr Nash said that the site included a house, some sheds a small amount of land. Mr Nash said that it is inevitable that “the State will have to pick up the tab” for the clean up.

Mr Leahy said that the case is “an extremely serious issue” which has the potential to be “ever more serious over the coming decades” if not resolved.

Judge Larkin said that “it is the taxpayer who will be paying for this, which is a matter of significant concern to everybody”. Regarding the possibility of a charge being placed on Mr Keating’s property, the judge said “I don’t see how he can argue against the council, unless he wants to go to jail”.

She said that either way, the cost to the taxpayer is going to be “far in excess of the penalty”.

She said that Mr Keating had chosen not to dispose of the waste paint properly. “Nobody has put him in this position except himself”.

She said that she wanted the council to explore further the likely cost of cleaning up the site, the possibility of a mortgage being placed on Mr Keating’s property.

She adjourned the case to September 3.