Mass appeal: Priest honoured by the British Army and IRA 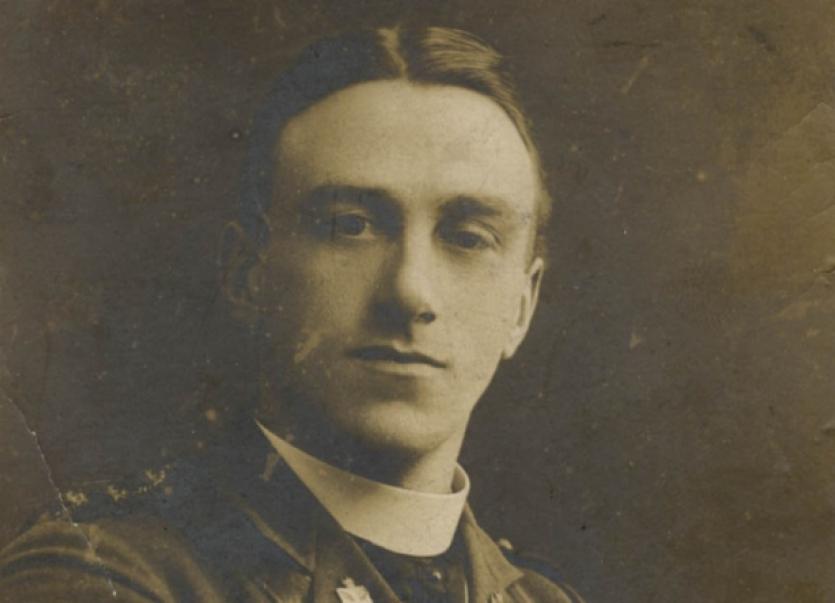 AN EXHIBITION entitled Portraits of the Invisible - The Irish in World War 1 has helped to shed light on the life of a remarkable Limerick priest who was honoured by both the British Army and the IRA.

AN EXHIBITION entitled Portraits of the Invisible - The Irish in World War 1 has helped to shed light on the life of a remarkable Limerick priest who was honoured by both the British Army and the IRA.

Despite Fr Joe Carroll receiving the Military Cross for bravery after serving in North Africa and France he was later involved in ambushes against the Black and Tans.

Fr Carroll, born in 1889 in Howardstown, Bruree, is one of 50 people whose photographs and stories feature in the display in the National Photographic Archive in Dublin.

The material was accumulated from a series of World War 1 road shows. Descendants were invited to bring personal items and tell their relatives’ stories. There could be few as rare as Fr Carroll’s.

As well as the official Military Cross he was presented with a silver cup and cigarette case by his comrades in the 7th Battalion of the Royal Irish Regiment such was the high regard he was held in.

A short few years later he was given an illuminated citation by the IRA.

In the submission to the road show it reads, “He didn’t like the British”.

Fr Carroll was the youngest of 14 - nine survived into adulthood with eight of those entering religious life. He was ordained at Maynooth in 1913 and sent, on loan, to the Archdiocese of Liverpool.

It was very common at the time for newly ordained Limerick priests to go abroad for a few years until a parish became vacant for them because they were so plentiful. One hundred years later so much has changed.

In 1916, Fr Carroll joined the British Army as a chaplain. He served until 1919 and was duly honoured for his courage.

There are a number of mentions of Fr Carroll in Tom Toomey’s tome The War of Independence in Limerick 1912-1921.

The historian said Fr Carroll was a very unique character.

“I never heard of somebody who was given a Military Cross from the British and a citation from the IRA. I think he is without parallel in that regard,” said Mr Toomey.

He thinks the priest’s attitude towards the British changed after he returned home to Ireland and saw what life was like in County Limerick.

Fr Carroll took up his appointment as curate in Fedamore parish in March 1919.

“The conditions that Fr Carroll found upon his return obviously made a very deep impression and he soon became a firm supporter of the IRA. At what stage he became chaplain to the local IRA is difficult to ascertain but it was clear that he was involved before the Mid-Limerick Flying Column participated in its first attempted ambush at Ballinagarde in September 1920.

“It was even stated that not alone did Fr Carroll hear the confessions of the men prior to the Grange ambush, which took place between Limerick and Bruff, but it was claimed that he actually took part in the ambush,” wrote Mr Toomey in The War of Independence.

A witness statement given by a member of the Fedamore Company to the Bureau of Military History demonstrates the religious attitude in Fedamore before and after Fr Carroll’s arrival.

A district inspector with the Royal Irish Constabulary called on the then parish priest and informed him that he would have the area declared a military area if the volunteers in the parish did not cease drilling and parading, he wrote.

On the instructions of the parish priest the curate informed the member of the Fedamore Company about the RIC warning and said, “that he himself would denounce us from the altar”.

“A mission was being held in the church at the time so I agreed not to drill or parade the volunteers while it was in progress.”

Due to the “interference” by the RIC and clergy he said they lost more than half of their men.

However, the curate was then replaced by Fr Carroll who, “Gave the local volunteers every encouragement and subsequently accompanied us on ambushes and often heard our confession preparatory to an attack on the enemy”.

In November 1921 when it was announced that Fr Carroll was being transferred from Fedamore to Feenagh the officers and men of the 5th Battalion of the Mid-Limerick Brigade came together to recognise and mark his service.

They commissioned an architect named PJ Sheahan to complete an illuminated address extolling the Bruree man’s services to the IRA in mid-Limerick.

Thus Fr Carroll, uniquely, became the recipient of the Military Cross from the British Army and a beautifully illuminated address of thanks from the IRA.

Fr Carroll eventually became Archdeacon Carroll and he died as parish priest of Rathkeale in June 1964.

Portraits of the Invisible: The Irish in World War I runs at the National Photographic Archive until January 2016. It is situated in Meeting House Square in Temple Bar, a short walk from the National Library of Ireland in Kildare Street, Dublin

The exhibition, held in partnership with the British Embassy, showcases many personal accounts from our history - about 210,000 Irishmen served in the British forces during World War I - but few can match that of the priest from Howardstown, Bruree.