Limerick city and county all set for Going for Gold 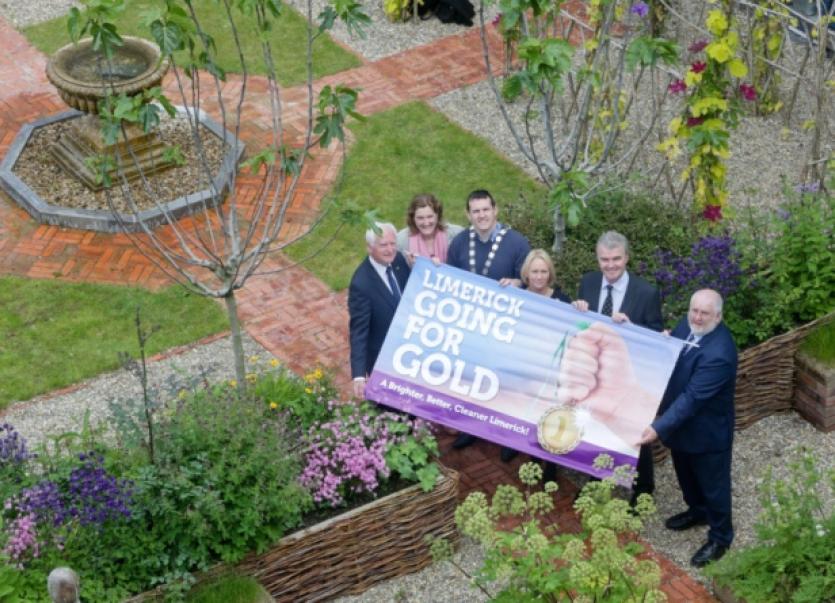 THERE was a warm ray of sunlight beating down on City Hall’s majestic medieval gardens, as the launch of the annual Going for Gold campaign took place yesterday.

THERE was a warm ray of sunlight beating down on City Hall’s majestic medieval gardens, as the launch of the annual Going for Gold campaign took place yesterday.

For the first time, both Limerick city and county will incorporate the Going for Gold ethos, encouraging people of all ages to help make their neighbourhood a cleaner and brighter place to work, live and visit.

Limerick City and County Council has organised this year’s competition, which will see a total prize fund of €74,000, which is totally funded by the JP McManus Charitable Foundation, for the year’s winners.

The four categories are the Going for Gold challenge, with a top prize of €10,000, Limerick in Bloom, the Tidy Towns Incentive and Best Front Garden competition, which is sponsored by Parkway Shopping Centre.

Councillor Frankie Daly said at the launch that he encourages as many groups as possible to participate.

“I was involved in Going for Gold last year. I was asked by Caherdavin and I went out there on two or three occasions for two or three hours.

“I got out with the residents there and I helped them as best as I could, and I thoroughly enjoyed it, and I would advise individuals, officials and public figures to take part, and get amongst your community and support them in a positive way,” he added.

Chairperson of the Limerick City Business Association, Helen O’Donnell said there are going to be “a lot more entries and a lot more interest from communities and probably more awareness that this is happening”, thanks to the Team Limerick Clean-up initiative that took place on April 3.

Limerick City and County Council’s environmental awareness officer Sinead O’Donnell said that the Limerick in Bloom competition will make this year’s competition “spectacular”, adding that it has been successful in previous years.

Alan English, editor of the Limerick Leader and the Limerick Chronicle, said the two titles are “looking forward to giving the latest initiative plenty of coverage” and that it is great to highlight more community efforts after this year’s successful Team Limerick Clean-up.