Fears that works could lead to flooding in Adare village 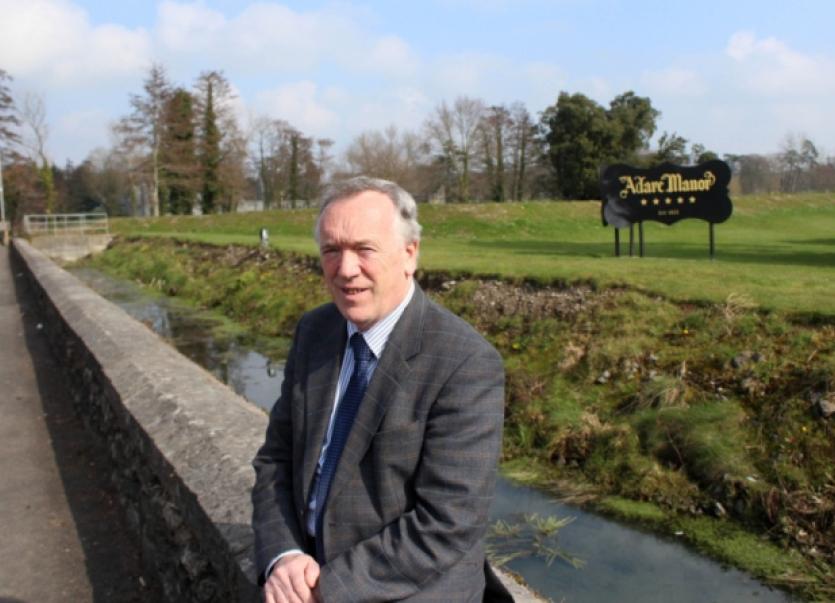 A local councillor has voiced fears that a new embankment erected to prevent flooding in Adare could in fact cause worse floods in some parts of the village.

A local councillor has voiced fears that a new embankment erected to prevent flooding in Adare could in fact cause worse floods in some parts of the village.

Cllr Stephen Keary is concerned that the large embankment which has been put in place between the Maigue river and the grounds of Adare Manor could cause flood waters to be diverted into populated areas of the village.

“They are after creating containment that was never there before,” he said.

And he claimed that the Office of Public Works (OPW) went ahead with the work without consulting with people familiar with the area.

The Fine Gael councillor raised the matter at this month’s meeting of the Adare Rathkeale municipal area. He specifically questioned the effect the work would have on the nearby bridge, on St Nicholas’ church and school and downstream on Station Road should severe flooding occur as happened in February of last year.

“I was very disappointed that no-one from the OPW showed up at that meeting and gave an explanation as to why they have carried out that work,” he said.

Cllr Keary said that the lands to the south of the river, which form part of the grounds of Adare Manor, had always been considered part of the natural flood plain for the Maigue.

He warned that, while the embankment would protect this land from flooding, it could have the effect of pushing flood waters back towards more residential parts of the village.

“It is only parkland and any flooding would be only temporary if it was to flood and when the floods would abate again, the water would run off. But if it was to be redirected downstream to a highly populated area, the damage that could be caused would be unquantifiable,” he said.

He now intends to raise the matter with the Minister for the Environment.

“I would like clarity from the OPW to say that what they have done is not going to impact on the residents of the village,” he added.

The issue almost scuppered the adoption of the Adare local area plan at last week’s meeting. Cllr Keary initially said he would not be prepared to support the plan – which sets out rules governing development in the village for the next five year – until he got answers from the OPW to his questions.

However, senior planner Gerry Sheeran warned the councillors that it would be “unprecedented” for them not to adopt a Local Area Plan.

“The OPW is not in the business of doing work to flood lands,” he added.

In the end, councillors agreed unanimously to accept the plan, on condition that two sections of land in the village - one at  Islandea and one to the east of the town park - retain their residential zoning.

However, a number of them expressed disappointment with the lack of communication from the OPW.