2,000 women do their bit by taking part in mini marathon 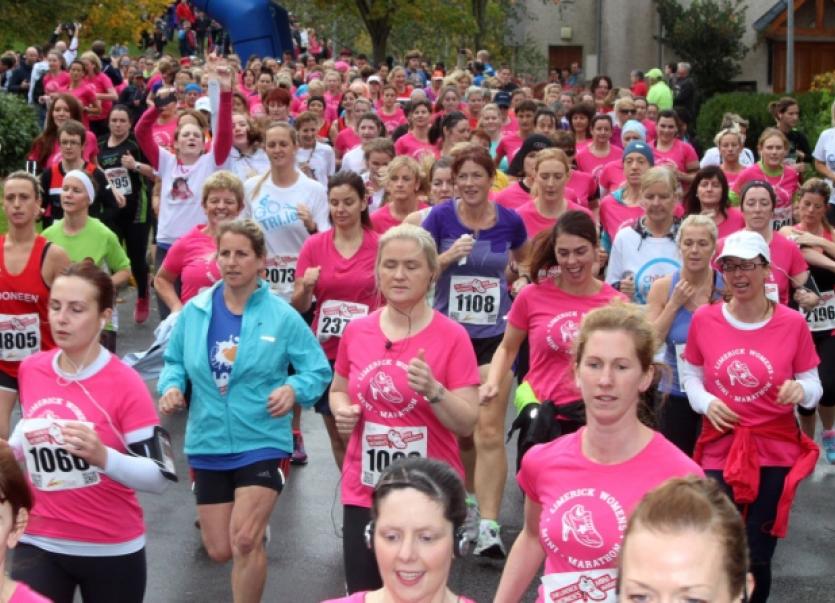 ATHLETE Michelle Finn may have been first to cross the finishing line in this year’s Limerick Women’s Mini Marathon, but it was charities from across the Mid West who were the real winners.

ATHLETE Michelle Finn may have been first to cross the finishing line in this year’s Limerick Women’s Mini Marathon, but it was charities from across the Mid West who were the real winners.

More than 2,000 women and a few dozen men participated in the annual event which was staged in-and-around the University of Limerick campus.

The mini marathon was officially started by Rosie Foley, who earlier this year swam the English Channel.

“It’s a huge occasion because it’s women doing it for women, 2,000 women in Limerick on a Sunday afternoon for a variety of reasons and each one of them is contributing not only to their own well-being but to the well-being of others,” she said.

Michelle Finn (24) from Kanturk finished the eight kilometre run in a time of 27:42 and speaking afterwards the Leevale athlete said she was happy to have taken part in the event.

“It was good, it was actually a really nice course and I felt good and I’m happy enough,” she said.

The winner of the wheelchair race was Nicola Dore (26) from Kilcornan while the first man to finish was 16-year-old Cathal McCarthy from Kilmallock.

Thousands of euro was raised for local charities, such as the Cliona Ring Foundation, Limerick Animal Welfare, Cari and Step Forward Ireland -a support group for parents whose children have Cerebral Palsy.

70 pupils from Laurel Hill school took part in the mini-marathon to raise money for the Paedeatric Oncology Unit at University Hospital Limerick in support of Rachel Macauley, whose sister, Becky (11), died in 2012.

“It’s a charity close to our hearts and I was happy to do it to support them,” said student Aishling Hehir(17).