Limerick to rise up again over water charge anger 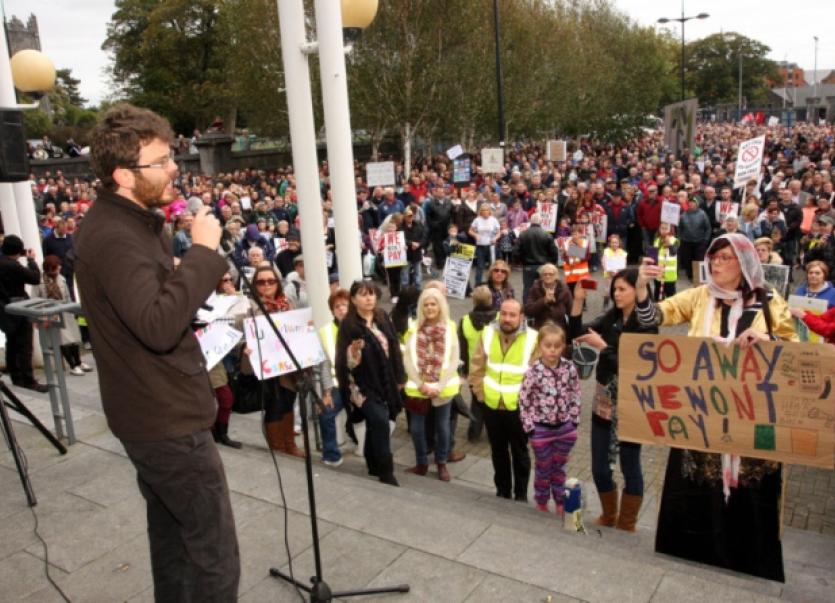 AFTER last weekend’s massive demonstration against water charges in the city, Limerick is to make another big stand on Saturday.

AFTER last weekend’s massive demonstration against water charges in the city, Limerick is to make another big stand on Saturday.

The Right2Water coalition - backed by trade unions Mandate and Unite plus the Anti-Austerity Alliance and Sinn Fein - has organised no fewer than eight protests across the county, city and south east Clare.

“We think this revolt needs to go into communities, to those people who are unsure, and those who are making their minds up about paying or not. It will show this protest movement is right in the heart of their areas,” co-organiser Cllr Cian Prendiville said.

In the city, marches will assemble at Punch’s Cross, the Treaty Stone and Claughaun GAA Club at 1.45pm, for a 2pm departure. Westbury’s march kicks off at 1pm from outside Tesco. All four, it is anticipated, will gather at Arthur’s Quay.

Meanwhile, in the south of the county, Anthony Higgins is hosting a “peaceful demonstration” in the centre of Ballylanders, and he wants members of the local community to join him.

Another rally will take place in Shannon Town from 1pm.

A protest from Newcastle West at 2pm on Saturday was set to be confirmed late this Wednesday night, while a demonstration against the charges will also take place from Abbeyfeale town park at the same time.

These community-led protests come after more than 6,000 people thronged the streets of Limerick last weekend, and hundreds of Irish Water application packs were burnt on a furnace.

Mothers, union representatives, teachers and volunteers all marched on Saturday lunchtime, and it is expected this demonstration will again see a large turnout from all sections of society.

“We have the government on the run. We want to keep the pressure up, and this is what Saturday is about. There will be protests in communities right across the country, and here in Limerick. We are telling the government we don’t want an easy pay plan or extended deadlines - we want this charge abolished,” Cllr Prendiville added.

He said the demonstrations will see wheelie bins rolled around for people to dump Irish Water forms in, if they had not done so yet.

St Laurence Park woman Mary Honan, who made an emotional speech outside City Hall, is to take part in one of the four city protests.

Although she had never taken part in a protest up until last week, she said: “I think we have a history here in Limerick of defence. We have defended our city against invasion of all sorts of forces, and I think it is in our DNA to stand up. We have been dormant for a long time, and we have been beaten into submission. It is like a worm. You can only abuse a person for long enough before you get a response.”

Anti-Austerity Alliance councillor John Loftus added: “With the government on the back foot, now is the time to step up the pressure”.

Sinn Fein’s leader on the council Maurice Quinlivan said: “There is a rising tide of anger in regard to the water tax. Now is the time for politicians to listen to the people on this issue.”

“These are the ordinary people on the ground. These were not people marching because they had nothing better to do of a Saturday afternoon. These are not people who would have supported the triple A, Independents or Sinn Fein. These are people who would have supported other parties. And when you get them on the street in large numbers, this is the beginning of change,” he said.