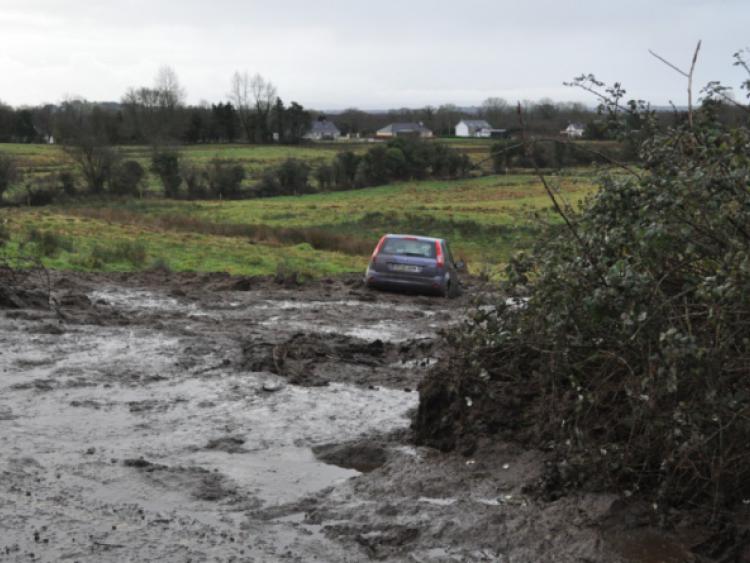 THE DRIVER of a car swept off the road and through a ditch by tens of thousands of gallons of slurry said it was like a “big wave of brown water”.

THE DRIVER of a car swept off the road and through a ditch by tens of thousands of gallons of slurry said it was like a “big wave of brown water”.

Joan McLoughlin, 59, has been recovering at home in Farnane, Cappamore from the shock of the freak accident at 9.50pm on Tuesday night at Cooga, Doon.

“I was after visiting my mother in Tipperary as it was my father’s anniversary Mass yesterday [Monday] and I was on my way back home.

“I came around the bend and this big wave of brown water or whatever it was came in front of me. I said where the heck is this coming out of, what is happening to me?

“Oh my God, I thought I was in another world. It just came out of nowhere,” said Mrs McLoughlin, who is married to Hugh. They have three grown-up children.

She said the force of the slurry, as it gathered speed coming down the slope from the burst tank, took her car deep into a field. Locals say it was miracle that the car, a Ford Fiesta, didn’t flip over.

“The next thing I came to a standstill in the middle of the mud. I tried to open the passenger door but couldn’t open it but I opened my own door. I couldn’t get out naturally because of the mud. I was afraid to get out,” said Mrs McLoughlin, who spoke to the Limerick Leader on the afternoon after the shocking incident.

Fellow motorists on the road surely couldn’t believe their eyes at the stream of slurry crossing the road in front of them.

“I saw the two cars, one was a hearse and another car. I shouted out, ‘Help, Help” and a man - John Ryan “Gardener” said to stay where I was and he would get help.

“He rang the emergency services and the fire brigade were over very quickly. An ambulance and gardai arrived as well,” said Mrs McLoughlin.

Firemen waded through feet of slurry to get to the car. Three lifted her to safety while the other held a torch.

“We got out OK and I’m alive to tell the tale. It could have been a lot worse. My father was looking after me,” said Mrs McLoughlin.

One local told the Leader she is a “great community woman” and very popular.

“Joan is involved in Cappamore ICA, is a great charity fundraiser and very much involved with the adults in the Daughters of Charity in Lisnagry where she works. Nobody can get their head around what happened to her,” they said.

Mrs McLoughlin can’t recall how many feet of slurry descended on her vehicle.

“The farm yard is up a bit high and when the wall burst it [the slurry] just caught the car. If I was coming the other way, if I got the force of it from the other side the car probably would have turned over. I was lucky I had my safety belt on,” said Mrs McLoughlin, The brave woman says her doctor told her she had tissue damage from being “bounced around”.

“My shoulder and back are a bit sore but I have no broken bones thank God. I’m not too bad now but I was fairly shaken up. I’m probably still in shock at the moment but my family are around me and I have a good few brothers and sisters, they are all good to me,” said Mrs McLoughlin.

Despite what she has been through she was quick to think of the late Ann O’Neill, who died in a road crash on the same stretch of road in 2011.

“I’m lucky to be alive when she was taken in such a freak way,” said Mrs McLoughlin, who wished to thank John Mulready and his fire brigade staff from Cappamore; John Ryan “Gardener”; the ambulance crew; gardai and the farm owners for their help.

The road was closed until 5pm on Tuesday afternoon.

The clean-up operation is ongoing and will continue for a few days. The cost of the clean-up and road restructuring is expected to run into thousands of euros.