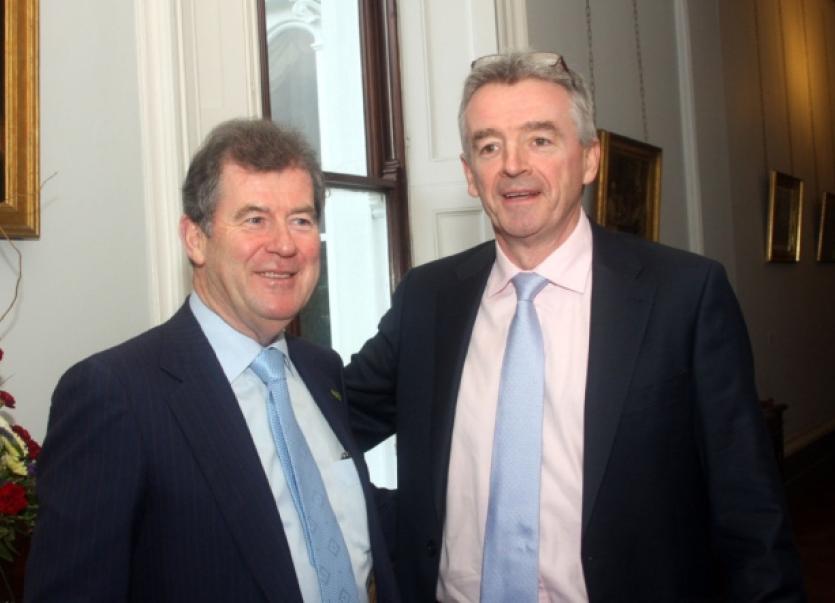 HE said what at least some of us were thinking.

HE said what at least some of us were thinking.

“When JP asked me to come down here about six months ago to address the assembly, I thought it was undoubtedly indicative of the state of the Irish economy and the depth of the recession that we have now stooped to,” said Michael O’Leary, Ryanair CEO and special guest at the All Ireland Scholarship awards, backed by his mate JP McManus.

“Three years ago you had Michael Flatley, last year some guy called Bill Clinton, and this year you are going for the ‘no frills’ option,” he quipped, to enormous laughter in the University Concert Hall.

“You will be paying for your lunch on the way out the door. No, no, no I jest – that was the old me. I am now all warm and cuddly.”

Mr O’Leary was doing his best to propagate the new Mr Friendly image he has been projecting in recent weeks.

Seated in the front row beside Noreen McManus as her husband spoke, the Ryanair whizz jotted a few notes down on a page, but then completely ignored them in a 10-minute speech, delightfully off the cuff and bursting with wit.

“It is a great pleasure to be here today. It’s a bit like being invited to a private dinner with the Queen – it’s an enormous honour, but you are just not sure how much fun you are going to have,” he joked.

“For those of you who may have some smattering of knowledge about National Hunt racing, you will know that I am actually a great fan of jumps racing, but at this function today, much like jump racing, I adopt my normal position, which is following JP,” he smiled. They were rolling in the aisles at this stage.

Studying the glossy handbook handed out to attendees, you could see O’Leary had earmarked the event as one to poke fun at his own image, as well as entertaining the students, teachers, principals and parents from all over Ireland.

He likened himself to both Jesus and George Clooney in the biography: “Born in a stable in 1961, he was a boy genius, who excelled both academically and at sports.

“Having represented Ireland internationally at bog snorkelling and flower arranging, he graduated from Trinity as soon as they could get rid of him.

“Bearing a remarkable resemblance to George Clooney’s younger brother, it is widely known that women find him irresistible,” it added.

There was clearly much affection between the McManus’ family – who were there en masse – and Mr O’Leary, but particularly from JP. He was palpably impressed to see the Ryanair CEO in a tie “for the first time in his life”.

Mr McManus eulogised him in his speech as “the most successful manager or any enterprise, large or small, that Ireland has ever produced”.

The Ryanair supremo, in a serious moment, said the scholarship project was an “amazing programme, the kind of initiative that you would come to expect from the McManus family”.

As he spoke, his phone rang.

“Sorry, excuse me, you will find that I am a genius, but not on the technology front.”

Continuing, he said: “To those of you who are here, I am supposed to give you some words of advice. Given that you are all the brightest and best, I think the top two students in every county, I am not sure there is that much advice I can give you, because you are all brighter and cleverer than me.

“The one thing that occurs to me first is, to just say to you all ... swots,” he added, to much laughter. “You were the type of kids I hated when I was in school.”

Still, it turned out he had come to offer some advice.

“Work hard in college, play hard, because that is what university is about. Enjoy yourself, but when you leave, be ambitious,” he offered.

“When you take up work, be ambitious and be hard working. Make a difference. What you do with it from here is down to you, so be bright, be brave, be ambitious, go forward and conquer the world.

“Be committed to your studies, sports, personal lives – but work hard, be ambitious, don’t settle for second best.”