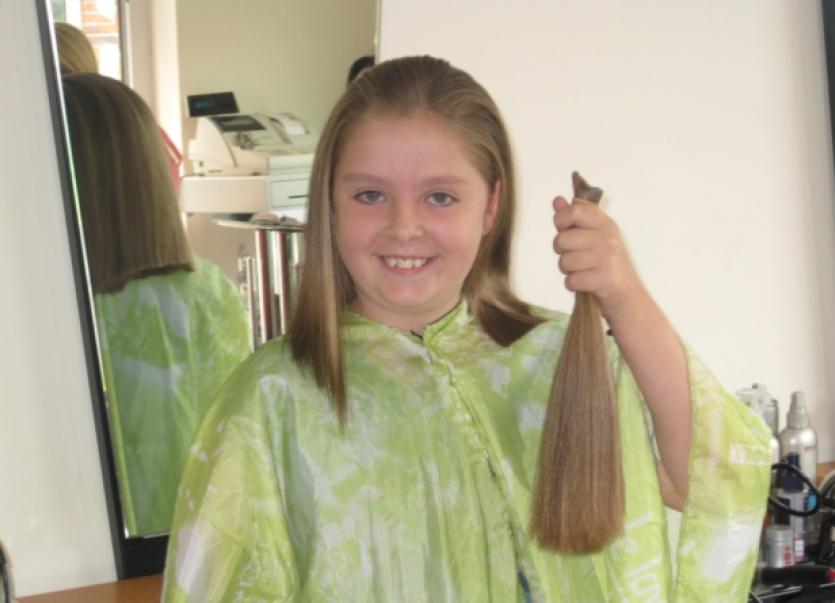 TWO years ago Michaela Heelan O’Neill saw a feature on RTÉ News about the Rapunzel Foundation and ever since then, she has had her heart set on helping them out.

TWO years ago Michaela Heelan O’Neill saw a feature on RTÉ News about the Rapunzel Foundation and ever since then, she has had her heart set on helping them out.

The 10-year-old from Kilteely who had been growing her hair for the past three years, parted company with 12 inches of her long, golden locks last week in an effort to improve the lives of those living with hair loss.

“Michaela was going on about this for the last two years,” her mum Breda explained this week.

“There was a piece on the news about kids donating their hair to children who had cancer and had lost their hair. She was on and on about it and I was trying to put her off saying ‘once it’s gone, it’s gone’ but she really wanted to do it so I let her off.”

The Rapunzel Foundation helps people with hair loss, through the collection of ponytails for the manufacture of natural hair wigs.

“First it’s going to be sent to New Zealand and the company there will make it into a wig but you actually need 10 ponytails to make it into a wig,” explained Michaela who is going into fifth class at Scoil Íosagáin in Hospital. “They will bring it back to Ireland and then send it over to Sweden.”

For Michaela, there will be no grand reward for her kind gesture, just a simple thank you letter and the quiet satisfaction of knowing that she has given something of herself to help another less fortunate.

“I didn’t mind,” she smiled when asked if she misses her long flowing locks. “My mammy was upset to see it go but she thinks it’s nice now.”

According to Breda, Michaela’s sister Shaunagh, 17, was more emotional again, and was even in tears after the big chop, but is now getting used to the shorter, more manageable ‘do’.

And what do Michaela’s friends think of her new look?

“Three of my friends have seen it and they said it was lovely,” she smiled.