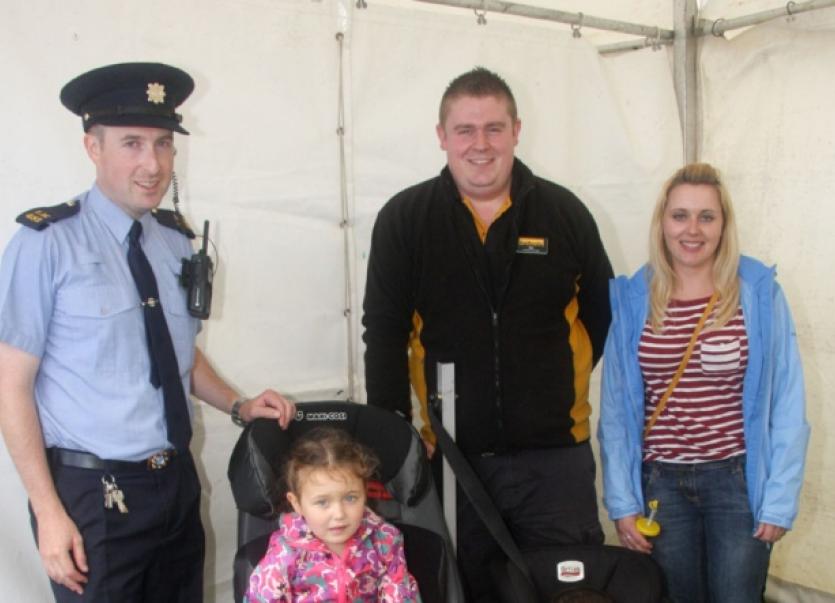 “ENSURING a child is properly restrained in a child car set can reduce injuries by a factor of 90-95 per cent for rear-facing seats and 60 per cent for forward facing seats”.

“ENSURING a child is properly restrained in a child car set can reduce injuries by a factor of 90-95 per cent for rear-facing seats and 60 per cent for forward facing seats”.

The AA’s statistics speak for themselves but actions speak louder than words and whether it is ignorance or negligence gardai are still seeing many children not properly restrained in cars.

Garda Adrian Nevin and Garda Aidan O’Gorman from Limerick Traffic Corps were at the Cappamore Show spreading their message of road safety.

Education as opposed to enforcement is their favoured approach.

“We have found personally out and about doing checkpoints that we are getting asked a lot of questions about child car seats and there is a lot of bad information out there.

“When it comes to child safety there can be no cutting corners as the consequences can be terrible,” said Garda Nevin.

Rearward-facing child car seats must never be used in the front passenger seats of cars with an active airbag.

Children aged three or over who are under 150cms in height and weighing less than 36kgs (generally children upto 11/12) must use the correct child seat, booster seat or booster cushion when travelling in cars or good vehicles.

One issue they are seeing more and more is older children not being restrained properly with the safety belt.

Gardai have noticed that if the safety belt cuts into their neck they are putting it behind their head.

“This means the only restraint is the belt going around their stomach. If there is a collision then there is no support for their upper body. They fold over and there is the possibility of lower spinal damage.

“If the safety belt is cutting into the child’s neck then something is wrong,” said Garda Nevin.

This is the third year that Limerick’s Traffic Corps have had a stand at the Cappamore Show.

Sergeant Helen Holden and Garda Bill Collins invited them out and fellow Bruff gardai, Tom McGlinchey and Adrian Condon manned the stand too. Last year they highlighted road safety with trailers and horseboxes resulting in invites by farming organisations to give talks.

This year they approached Halfords to focus on child car seats. Manager, Keith McLarnon, thought it was a great idea and their safety expert, Ger McAuley, brought demonstration seats and a display.

Patrons were attracted to the stand by a current garda car, NYPD vintage vehicle and a Ford Anglia police car, like the one in Heartbeat.

Garda Nevin says crowds were drawn by the cars and when they got talking to gardai about child car seats there was a big response.

“Some even went away and got other friends and families to show them. The two main areas were questions on what child seat their sons and daughters should be in and how to fit the seat properly,” said Garda Nevin.

He says the information was of particular interest to grandparents.

“They were very curious because when they were bringing up their children there weren’t any child safety seats. They want to ensure that when they take their grandchildren in their car that they are safe and secure. A lot of this is new to them,” said Garda Nevin.

For more info log onto rsa.ie and you can order a free booklet and DVD online or by ringing 1890506080. If any community group, school or company would like the Traffic Corp to give a road safety demonstration send in a request Limerick Traffic Corp, Estuary House, Henry Street, Limerick.