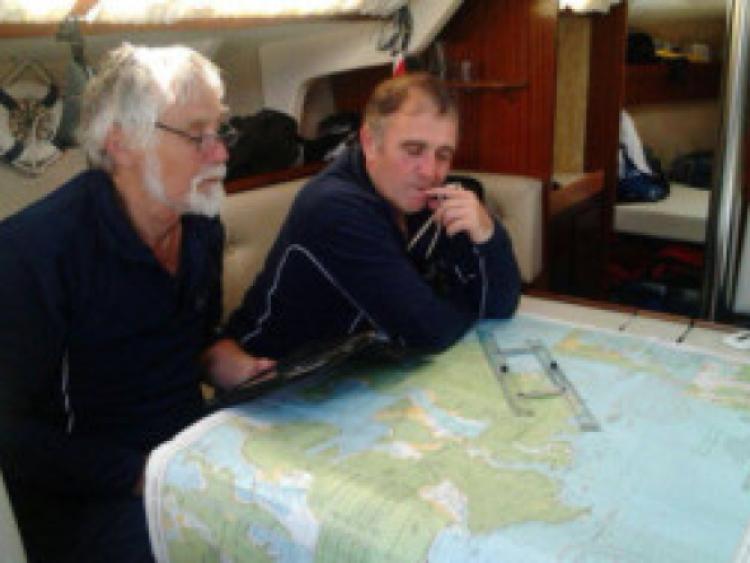 THE sea-odyssey of postman Chris Egan and farmer Dave Bevan is coming to an end.

THE sea-odyssey of postman Chris Egan and farmer Dave Bevan is coming to an end.

This Saturday, the two men, with their friend, minder and fellow-crew member, Gerry Hutton, will sail up the Shannon and expect to arrive at their home-port of Foynes shortly after 7pm, bringing their sea-voyage of over 1,200 nautical miles to a safe and happy end.

“It’s been a dream come true,” Chris told the Limerick Leader from their berth in Dingle. “We have had a blast.”

Dave agreed. “It has been a great adventure,” he said.

And both men have been overwhelmed by the warmth of the welcome they have received throughout their voyage. “People were so good to us,” Dave added. “It really made it for us.”

Their journey, however, has not only stored up enough good memories to last a lifetime. It has also helped to raise funds for cancer research and for the lifeboat service.

And tragically, while making their way from Kilmore Quay, and heading for Crosshaven, Dave, Chris and Gerry felt at first hand, the power of the sea and the crucial need for lifeboat services.

On the very day that the three Bolger brothers were drowned off the coast of Waterford, the Inizi was sailing the same stretch of coast although further out at sea.

Thankfully for the crew of the Inizi, there were no mishaps that day, nor any other and no mechanical failures, throughout the trip.

Sailing conditions at various times of the long voyage were tough, however, particularly on the west coast and along the south-east coast.

The trip tested their seamanship, Chris acknowledged. And it also tested their navigational skills, as a large part of their route was unknown territory to them.

But both he and Dave would love to do it all over again.

For Dave, sailing into Cork harbour was particularly poignant. He was heading for his last chemotherapy session for his colon cancer. The crew landed him in Cork on Wednesday and collected him again on Friday. Job done.

“It all worked out very well. After the chemo I felt absolutely grand and I am glad to be coming to the end of my pills,” he said this week before adding: “We could nearly head away again.”

Indeed they might as one big bonus of the trip for all concerned was the deepening of friendship and comradeship among the men who didn’t know one another until they became involved in planning the round-Ireland trip. They were also joined along the way and for various lengths of time by members of Foynes Yacht Club.

First though, they have to have their homecoming and this is likely to be a lively affair.

The men plan to leave Kilrush this Saturday afternoon and will head upriver to Foynes to arrive sometime around 7pm.

However, it is more than likely that they will be joined en route by fellow sailors and yacht club members, to give them a true seaman’s welcome home.