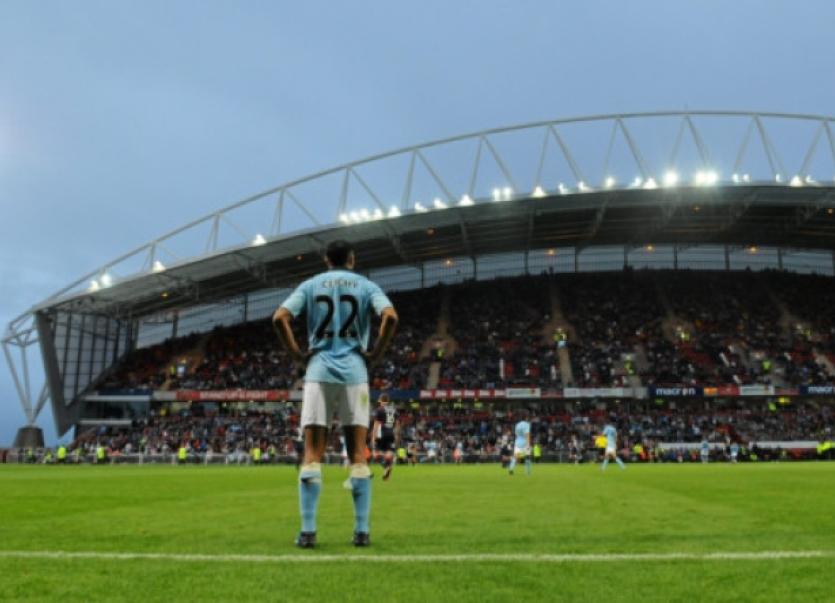 A CASE in which a banana was thrown in the direction of a black footballer at Thomond Park underlines the need for tougher sentencing for racially-motivated offences, according to a group working with immigrants in Limerick.

A CASE in which a banana was thrown in the direction of a black footballer at Thomond Park underlines the need for tougher sentencing for racially-motivated offences, according to a group working with immigrants in Limerick.

Doras Luimni were reacting to the conviction for a public order offence of 20-year-old Kelvin Reynolds from Caherdavin. Reynolds admitted throwing the banana on to the pitch during Limerick FC’s glamour friendly against Manchester City last August. The fruit had landed near City player Gael Clichy but Reynolds denied the act had been racially motivated. Judge Eugene O’Kelly rejected this defence and Reynolds’ suitability for community service is to be assessed.

“We wish to commend Judge Eugene O’Kelly on taking a strong line against this behaviour. He has recognised that this was a racially motivated assault and he has been very strong in saying that it is completely unacceptable,” a spokesperson for Doras said.

But Doras would like to see changes in law where, in circumstances where the racial motivation of an offence is clear, tougher sentences would apply.

“We would have hoped for a harsher sentence to clearly demonstrate the unacceptability of this offence to the wider community. We believe that this would help to deter potential offenders. In addition, seeing racism taken seriously and justice being served would help give confidence to people who experience racism to make formal complaints in the future.

“Unfortunately, the current criminal justice system does not in any way adequately provide policy, legislation or guidelines in relation to racist offences. What is required is a clear set of guidelines on the sentencing of racially motivated and racially aggravated crimes,” the spokesperson said.

When Reynolds case was called, the court heard that a number of members of public had made complaints to the gardai but, according to Doras, the “vast majority” of racist incidents are unreported.

Doras CEO Karen McHugh said: “It is only by recording information about incidents that we can understand the extent of the problem of racism. Recently, we have observed a rise in local incidents of racism and discrimination coming to our attention and we are very concerned about this. It is a top priority of our work to document these incidents. This is essential for making the case for stronger sanctions and an unambiguous legal stance that racism is abuse, it is unacceptable and it is punishable by law. We have set up an email address specifically for reporting of racism and we are working closely with many stakeholders at the local and national level. We are preparing to make an announcement about a project we are developing and we will be asking for support by the local public in this.”

Those who are concerned about possible racism can contact Doras Luimni at 061 310328, email reportracism@dorasluimni.org or call into its offices on O’Connell Avenue.