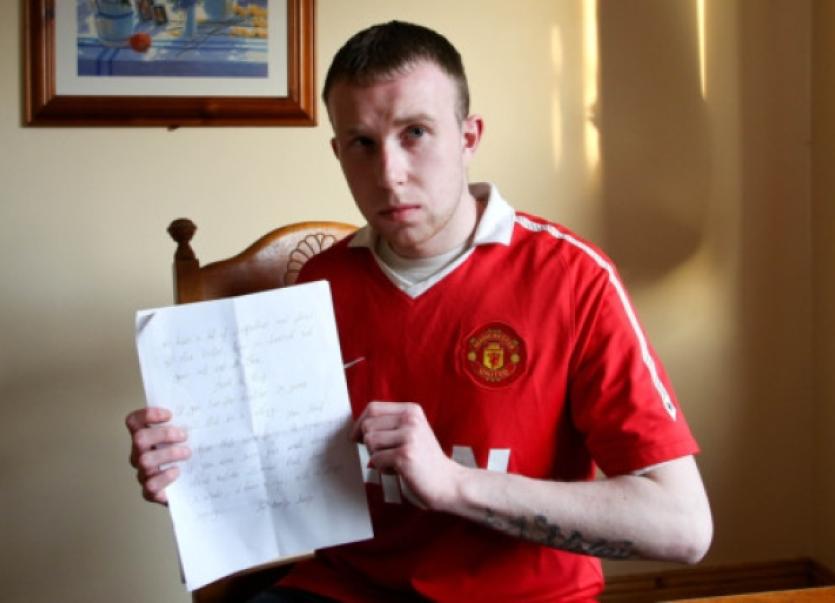 THE 20-year-old city youth who threw a banana at Manchester City star Gael Clichy in Thomond Park says he received hate mail this week, which he has handed over to the gardai.

THE 20-year-old city youth who threw a banana at Manchester City star Gael Clichy in Thomond Park says he received hate mail this week, which he has handed over to the gardai.

“We have a lot of supporters and fans of Man United, here in Limerick and your not one of them,” the single page letter sent to the home of Kelvin Reynolds stated.

Concerned over the safety of his one-year-old son and girlfriend, Mr Reynolds, who lives in Caherdavin, has handed over the letter to the Gardai to investigate what he sees as a hate mail threat.

Last week in court Judge Eugene O’Kelly sought a suitability report from the Probation Service for 60 hours community service in lieu of three months in prison in relation to the public order offence regarding throwing the banana and Mr Reynolds faces a further 180 hours community service for assaulting Garda Caimin Treacy by throwing a plastic bottle at the officer.

The letter sent to Mr Reynolds home added: “You look the type that’s never sorry; no upbringing. If you were sorry you would stand outside Thomond Park for 2 weeks, 2 hours a day, with a sign saying: “I’m Really Sorry.”

But this week Mr Reynolds said again that he was very sorry for the “stupid thing” that he did.

“I had a few drinks, and a child gave me a banana. I am not a racist and am very sorry for what I did,” he stated.

“It was nothing to do with me being a Man Utd supporter, it was just a stupid thing I did,” he added.

He now wants to get on with his life and is doing a course on Food and Nutrition and hopes he will get a job when his course is completed.

“I was drunk the day it happened and I would have thrown the banana at anyone on the pitch. It just happened that it was Gael Clichy. I am really frightened by this. I know I did wrong and I am sorry.

At the court case Judge O’Kelly said he had “no doubt” Reynolds knew what he was doing and that the incident had been racially motivated, when he threw the banana.