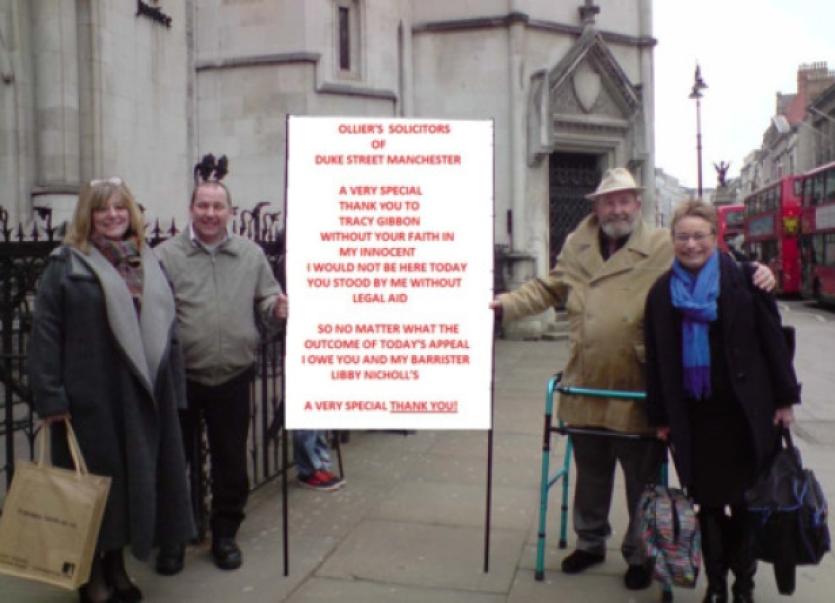 a LIMERICK pensioner who claimed he was “framed” by British police has had his conviction for robbery in the 1980s quashed by the Court of Appeal.

a LIMERICK pensioner who claimed he was “framed” by British police has had his conviction for robbery in the 1980s quashed by the Court of Appeal.

Kileely man Martin Foran, 69, who moved to England in the 1960s, has seen his dying wish granted after the Court of Appeal overturned his conviction due to “the serious tainting of police evidence”.

Now, Mr Foran, living in Manchester, plans to counter-sue the officers involved in his arrest.

He was jailed in 1985 for the gang robbery of £1,700 from a Birmingham pub landlord and a plot to raid a post office in the city days later.

The disabled father-of-five served eight years in prison on the back of evidence from the discredited police outfit which investigated the Birmingham six.

Mr Foran had always protested his innocence, saying he was framed by the West Midlands police squad, which was abolished in 1989.

And this week, his 28 year campaign for justice came to a successful conclusion, with Lord Justice Leveson saying Mr Foran’s conviction must be overturned, due to the “serious tainting of police evidence”.

At the High Court, Lord Leveson said the trial may have gone in a different direction of the defence had known about problems with officers evidence regarding Mr Foran’s claimed confession.

The Kileely man - who still has family in Limerick - says he can now go to his grave with his children knowing he is innocent.

He admitted the ruling was a “huge weight off his shoulders” - but said they still have a big fight to come.

Speaking to the Limerick Leader from his Manchester home this week, he said: “All I wanted justice before I went to my grave. We have won one main battle, but we have another one to go. We have been fighting for 28 years, and the judges have really started opening their eyes. For the first time, we have had the forensic proof that the police added lines to their statement, they withheld forensic evidence which has proven I could not have done that robbery. They changed the wording in those statements, they stole documents,” he continued.

He confirmed he would now sue the former chief constable of the West Midlands Police, and the force itself, saying: “I want to show them for the evil they are.” Mr Foran also plans to release his account of proceedings - The Forgotten Man - this summer.