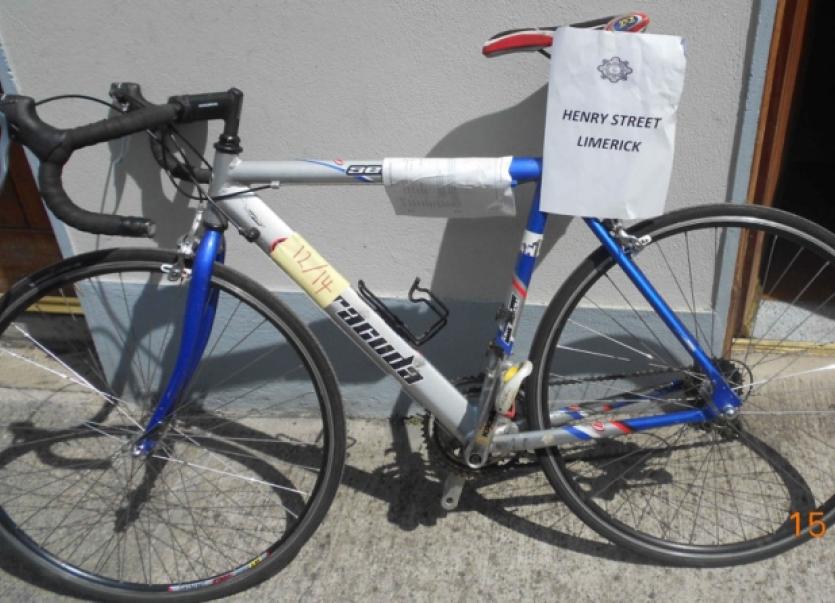 IMAGES of nearly 80 bicycles in Limerick which have been found by gardai have been released online in a bid to return them to their owners.

IMAGES of nearly 80 bicycles in Limerick which have been found by gardai have been released online in a bid to return them to their owners.

In support of National Bike Week, an initiative of the Department of Transport, Tourism and Sport, which ran last week, An Garda Síochána is highlighting the increase in bike related crime.Over the last 10 years the level of bike theft has increased by 227%, with approximately 6,750 reported bicycle thefts in 2014, equating to a monetary loss in the region of €4m.

By the end of this May there have been in excess of 2,100 reported bike thefts nationally, with in excess of 1,600 (76%) reported in the Dublin region. Bicycles recovered by An Garda Síochána, where they cannot identify an owner, are regularly advertised on the Garda Síochána Flickr website.

As part of National Bike Week, bikes from a number of areas, including Limerick, have recently been uploaded and they are appealing to those who have had their bikes robbed in these areas to view the website with a view to possible recovery. However, only 10% of bike owners are able to provide An Garda Síochána with the bicycle frame number.

Recovered bicycles are disposed of by An Garda Síochána through our approved auctioneers, Wilsons Auctions. In the last three years Wilsons have sold, on behalf of gardai, approximately 2,500 bicycles.

Inspector Liam Geraghty, community policing unit, urged people that “when you invest in your bike, also invest in the lock, always lock your bike, no matter how quick you think you might be away and also at home or work, always report bike theft and please record the frame number of your bicycle”.

Members of the public can arrange to view the property by calling Henry Street garda station on 061 212 400 between 9am and 5pm, Monday to Friday.