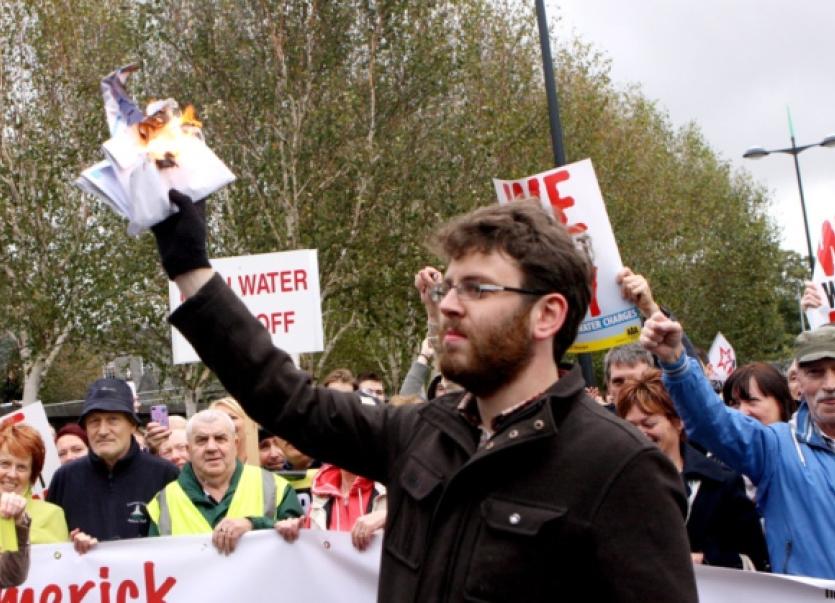 TWO further protests against water charges are to take place in the city this weekend.

TWO further protests against water charges are to take place in the city this weekend.

This afternoon, the Anti-Austerity Alliance (AAA) will hold a ‘bonfire’ in Limerick for anyone who wants to burn communications from Irish Water.

It will be lit outside City Hall between 2pm and 3pm, says northside councillor Cian Prendiville, who believes it will be one of the biggest bonfires the city has ever seen.

Meanwhile, the city will play host to a ‘Right2Water’ march, tomorrow which will meet at Arthur’s Quay Park from 12.30pm.

The demonstrations come after Irish Water declined to reveal how many people in Limerick they have taken charges from.

Cllr Prendiville wrote to the state water utility to ask how many bills had been issued in Limerick, how many of these are now past their due date and how many had been paid in full.

In response, a member of Irish Water’s local representative support desk said: “We are not in a position to confirm information at this time.”

She said this was because of the various different methods in which water charge bills are being issued, as well as variations due to some customers being metered and unmetered.

He says the bonfire represents a chance for those opposed to water charges to come together.

“Non-payment is not an individual action, it is part of a mass movement - the biggest movement in the history of the state. This event is about solidarity, people standing together and burning their bills, sending a clear message to Irish Water and the government that we have no intentions of paying twice for water. We already pay for water through our taxes. We won’t pay for Denis O’Brien’s greed,” he said.

“There will also be a ‘Trial of Denis O’Brien’, where we will have a mock billionaire take the stand,” he added.

Meanwhile, Sinn Fein councillor Séighin Ó Ceallaigh, who will attend the Right2Water protest, said: “This is a chance for the people of Limerick to let the Fine Gael and Labour government know we do not accept their austerity measures, which include Water Charges and cuts to lone parents. People simply can’t afford to pay yet another tax which does not take people’s ability to pay into account. I believe that through progressive and fair taxation is only viable way to fix this country’s financial situation, not charging people for a basic necessity such as water.”

Water bills have been widely circulated across Limerick, with the unmetered charge ranging from between €40 to €65.