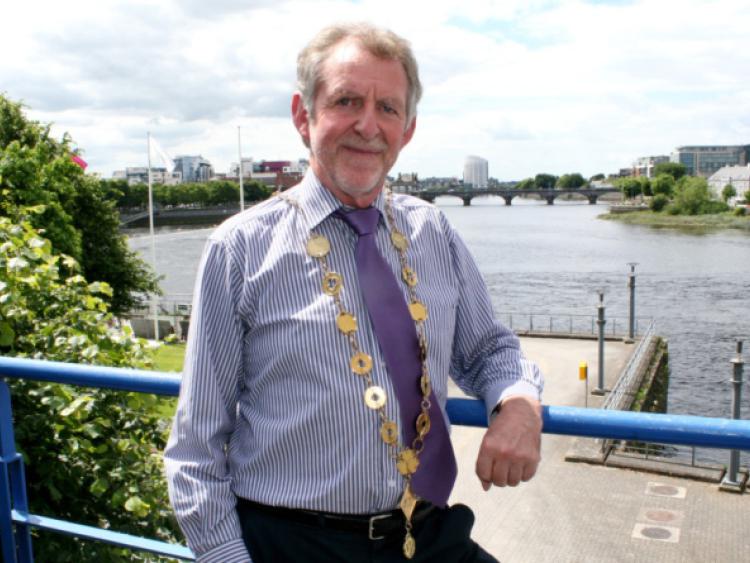 FORMER metropolitan mayor Michael Sheahan says he felt “humiliated” at not being allowed speak when President Michael D Higgins was awarded the Freedom of Limerick.

FORMER metropolitan mayor Michael Sheahan says he felt “humiliated” at not being allowed speak when President Michael D Higgins was awarded the Freedom of Limerick.

And it represented his “darkest day” in the role.

The Fine Gael councillor, and the first metropolitan district mayor has lifted the lid on his year in office, saying it was “satisfying”, but at times “very frustrating”.

When Fine Gael councillor Michael Sheahan was elected as mayor, he accepted that his role would be secondary to that of council leader Kevin Sheahan of Fianna Fail.

But he said council officials made an effort to keep him “completely out of the loop”.

However, the councillor says he has taken a lot of positives from his year as mayor, including making lasting contacts with voluntary groups through meetings in his office at City Hall.

“I marvel at these people who give up so much of their time in the service of other people in their community,” he said. “Now I am out of office, I intend keeping in contact with them.”

However, unlike other districts, he was allowed to hold the title of mayor, in a move many saw as a retention of some of the prestige the city holds.

However, Cllr Sheahan believes local authority staff “interpreted this act in the narrowest way they could” to the detriment of his office.

When President Higgins had the Freedom of Limerick bestowed on him, Mayor Sheahan was given a watching brief.

Cllr Kevin Sheahan – then the cathaoirleach – officiated, while various council staff members, and local party leaders were all allowed make speeches in the Milk Market.

However, Cllr Michael Sheahan sat there motionless, despite wearing a ceremonial chain of office, something he felt was a double insult given the fact he also chairs the Market Trustees.

“As mayor of the district the man was coming into, I felt I would at least be allowed the chance to speak. I felt embarrassed for the position I held, but I did not want to create any public outcry about it, so I bit my lip on it. But it was my lowest point as mayor of the city.”

Following the ceremony, he said a number of people came up to him “aghast, embarrassed, shocked and disappointed” that he did not speak.

Cllr Sheahan did try to get speaking time at the ceremony, but he says he it was “conveyed” to him that he could not speak “for protocol reasons”.

However, he contrasts this with the civic reception which he pioneered, which saw honours for Charlotte Grace O’Brien, Kate O’Brien and Sophie Mary Peirce.

“This was a big high point for me,” he said. “I have visited so many different people living in difficult circumstances, who are still so positive about their future, and about life in their communities.”

The Monaleen councillor’s communications with council boss Conn Murray were limited at best.

In the weeks after he was elected, he claims Mr Murray attended his office with a promise he would keep him updated.

“But that was it,” Cllr Sheahan said.

On only one occasion has the council boss attended a metropoltian district meeting.

On this, Cllr Sheahan said: “That laid down a marker that he is interpreting the local government act in the narrowest possible way”.

It was Mr Murray who last November brought forward plans to abolish the title of cathaoirleach, and instead create the position of Mayor of Limerick City and County.

He cited problems with foreign visitors understanding what exactly the term cathaoirleach meant. Since Fianna Fail joined Sinn Fein and Labour in voting to back this motion, Limerick has had two mayors.

Cllr Sheahan says he is surprised the idea was adopted so quickly.

“Originally I thought because we are both Sheahans for a start, there is no way they would think of having two Mayor Sheahans. I was surprised when all the parties, except Fine Gael, were so ready to embrace the change. But since then, a lot of politicians have come to me privately to say we should have taken time out to discuss it further,” he said.

The dual mayoralty system even made it into the Dail record when Fine Gael TD Mr O’Donovan asked Local Government Minister Alan Kelly if he had any plans to amend the legislation.

“I was annoyed by that,” Cllr Sheahan said of his party colleague’s actions. “These things should be discussed locally, not by backbenchers in the Dail who are not even representatives of the area in question. The person who raised it never at any stage discussed any of it with the mayor of the city he was talking about.”

He also had critical words for Labour councillor Joe Leddin who, having seen a motion to abolish the metropolitan mayoralty defeated by councillors, decided to lobby Mr Kelly for change anyway.

“Local democracy decided we should hold onto our title of the mayor, and no-one should go to a higher level should subvert that decision. To me, it was surprising considering the councillor’s family has held the mayoralty for many years,” he said.

He believes Mr Hogan should have incorporated Shannon Banks and Westbury into the city area when the merger was planned.

And he thinks it “unfair” that Galway, Cork and Kilkenny were allowed keep two local authorities, and Limerick was not.