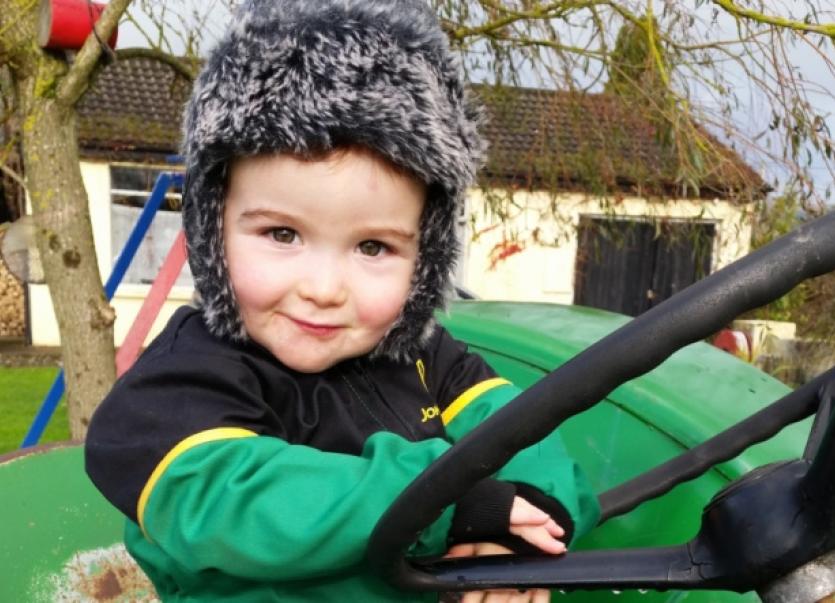 TWO-YEAR-OLD Darragh O’Brien would have been able to tell his mum and dad every make and model at a vintage tractor run in Doon on April 26 – but sadly he will be looking down from heaven.

TWO-YEAR-OLD Darragh O’Brien would have been able to tell his mum and dad every make and model at a vintage tractor run in Doon on April 26 – but sadly he will be looking down from heaven.

Patrice and Donnacha, aged 23, lost their only child from a sudden unexplained death in childhood (SUDC).

An hour before he died, Patrice, from Doon, could hear Darragh singing happily to his teddies.

To celebrate his life and raise money for the charity, First Light, the couple have organised a vintage tractor run and family fun day in Doon on Sunday, April 26.

“I’m from a farming background in Hollyford and there would always be vintage tractor magazines in the house. He used to sit down and look through them,” said Donnacha.

“They were his favourite books and he loved Tractor Ted too,” said Patrice.

Darragh was so clever that if a tractor went past the house he could tell them what type it was.

“He taught me so much. We go him a digger for his birthday and he said, ‘It’s not a digger mam, it’s an excavator,” said Patrice.

Darragh loved going to the vintage show in Doon so they thought they would organise a tractor run and fun day for all the family to keep his memory alive. A vintage tractor with “Darragh’s Rig” inscribed on it led the funeral procession.

“Apart from the odd cough he was never sick a day in his life. He was perfect going to bed that night. It was November 21. He was singing going to bed. If I muted the TV I could hear him singing away to his teddies.

“I just went down to check him before I went to bed and he was gone. He just went in his sleep. I started doing CPR, mam and dad rang an ambulance and they got John from next door who works with the Red Cross.

“He came with the defibrillator in two minutes and the ambulance was here in 40 minutes. There was nothing anyone could have done,” said Patrice.

Donnacha was working in Murroe that night until he got the phone call that is every parent’s worst nightmare.

“We haven’t got any results yet but they are saying since it is taking so long it’s a cot death. They call it sudden unexplained death in childhood,” said Donnacha.

The couple received untold love and support from their parents, families, relatives, friends and communities, but they also found solace through First Light. The charity offers bereavement support to families of deceased infants or children.

“It is a charity that hopefully no one has to use but unfortunately we are in the position that we are glad that they are there and that we can use. You would rather you never heard of them but we would like to highlight that they are there,” said Donnacha.

First Light provides counselling and holds monthly meetings in Limerick. They have also met parents who have lost children and can share what they are going through.

A fundraising table quiz in The Local in Doon has already raised over €6,000. Over 54 tables were filled when they expected around 20.

“It was heartwarming to see the amount of people coming out in support - it was phenomenal. Family, relatives, friends, everyone has really put their shoulders to the wheel behind us.

“You never expect things to happen like that but when they do you realise, and see, who are the rocks behind you,” they say.

A further €6,000 has been donated on a My Charity page. There is no fee to take part in the vintage run or enjoy the family fun day but there will be buckets for donations to First Light.

Drivers are asked to congregate from 11am on Sunday, April 26, and they aim to leave for Murroe at around noon. The only stipulation is the tractor must be older than 1985.

There is also an open invitation to the family fun day in the community centre from noon. There will be a host of attractions including bouncy castles, face painting, go-karts, animal magic, zorb soccer and much more.