Munster and Cliona’s Foundation team up as players meet families 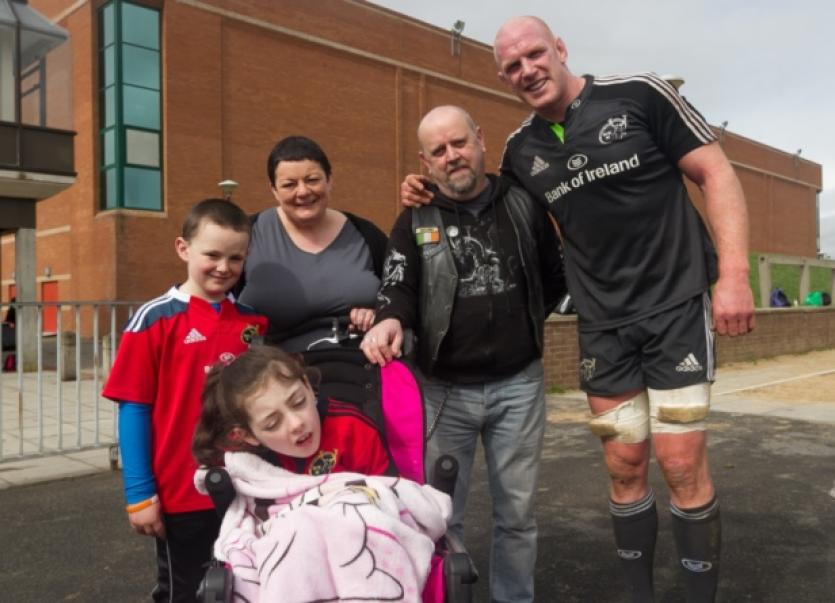 THEY SAY never meet your heroes as they will only disappoint – but that wasn’t true for five families, supported by Cliona’s Foundation, who met Munster players.

THEY SAY never meet your heroes as they will only disappoint – but that wasn’t true for five families, supported by Cliona’s Foundation, who met Munster players.

But the Munster players would say the people they met are the true heroes. Former Ireland rugby captain Joy Neville, who is an ambassador for Cliona’s Foundation, put in the call and Munster were happy to oblige.

Around 20 met players after training in UL.

One family was Tony and Pauline Wallace, Raheen and their 16-month-old son, Eoghan. Born two months premature he has chronic lung disease and has had pneumonia five times. Eoghan also has a heart murmur and problems with his digestive tract. But he is as brave as a lion and when he saw the Munster players Tony said is was hard to keep him in the buggy,

“He is taking a few steps on his own now and once he saw a field and the fellows running around he was mad to get going! There is improvement every week with him,” said Tony. They met a host of internationals including Paul O’Connell, Conor Murray and Peter O’Mahony.

“It was an honour to meet Paul O’Connell – one of the greatest players to ever play the game. They were all wrecked after training but they spent 15 minutes chatting and they had a story for everyone.

“At the end of it I was carrying Eoghan’s buggy up a load of steps and I saw Anthony Foley come running across the courtyard. He flew up the steps and helped me carry the buggy up the rest of the way. It just shows the character of the players and management,” said Tony, who thanked Munster and Cliona’s Foundation.

The Limerick charity contacted the Wallaces completely out of the blue when Eoghan was four months.

“They said, ‘We heard you son is unwell and is there anything we can do for you?’ We were just blown away. For example, they gave us tickets for the panto at Christmas. It is just something to show you there is light at the end of the tunnel,” said Tony.

David and Mary Crowe and their children Sarah, aged 11, and Jimmy, 9, travelled in from Kilfinane.

Sarah has a condition called Alpers disease which is a progressive neurologic disorder. After she got sick in 2007 doctors told them that if she lived for two years they would be very lucky. Eight years on she epitomises Munster’s fighting spirit.

“At the moment she is the only one in Ireland, that we know of, with Alpers. She has had a lot of bad episodes where she ended up in hospital. A couple of times we were told this is the final time. In 2011, they told us she bounced back before but she will not bounce back this time,” said David. Yet there she was meeting the likes of Donncha O’Callaghan, CJ Stander and Paul O’Connell.

“They were lovely fellows. It was nice of them to give their time. There was no airs and graces - they were down to earth and friendly as you could meet. Jimmy was gobsmacked and my wife just loves rugby. They autographed programmes and tickets - they were willing to do anything,” said David, who added that Cliona’s Foundation have been very kind to them.

His brother-in-law Martin Hennessy is currently cycling 5,700km to Tbilisi then flying to China to compete in the Gobi Desert Challenge to raise money for the charity.

Allison McNamara, of Cliona’s Foundation, said it was an amazing day out for all of the families and wished to thank Anthony Foley, Niall O’Donovan, Paul O’Connell, Peter O’Mahony, Conor Murray, Billy Holland, CJ Stander, and Joy Neville for arranging it.