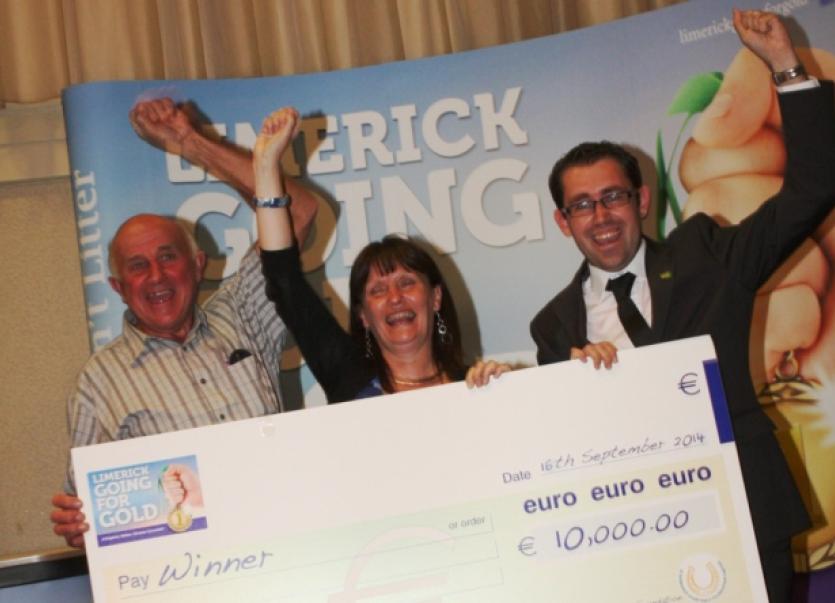 There were jubilant celebrations in The Strand Hotel last evening as the residents of Caherdavin claimed the top prize in this years Limerick Going for Gold competition.

There were jubilant celebrations in The Strand Hotel last evening as the residents of Caherdavin claimed the top prize in this years Limerick Going for Gold competition.

A total of seven communities from across the city made it to the grand final which had a total prize pool of over €50,000, courtesy of the JP McManus Charitable Foundation.

Prizes were also awarded in four other Going For Gold categories with Kilteragh, Dooradoyle winning the Community Challenge competition.

Cathaoirleach of Limerick City and County Council, Cllr Kevin Sheahan congratulated the participating communities for helping to ensure that Limerick Going for Gold 2014 was “a tremendous success”.

He also thanked Limerick City and County Council and the JP McManus Charitable Foundation for organising the initiative, as well as the event supporters and sponsors including The Limerick Leader and Limerick Chronicle.

“Limerick Going for Gold’s mission was to make Limerick a brighter, better, cleaner place to live, work and visit and every community who participated in this campaign, as well as the event sponsors and supporters continues to contribute to that mission,” stated Councillor Sheahan.

The Tidy Towns Category was made up of 16 groups from Limerick City and the environs who entered the 2014 national Tidy Towns Competition, with the finalists and winners being decided by a combination of local judging and results from the Tidy Towns.

The Community Challenge Category, for groups not participating in the Tidy Towns Competition, was won by Kilteragh who received a €5,000 first prize.

Claire Waters, Barrington Street won the Best Garden competition, which was sponsored by the Parkway Shopping Centre while eight individual merit awards were also presented on the night.

A new addition to this year’s Going for Gold was the Endeavour Award category with the inaugural recipients being Limerick Riverpath Volunteers, Limerick Youth Service and Limerick Civic Trust.