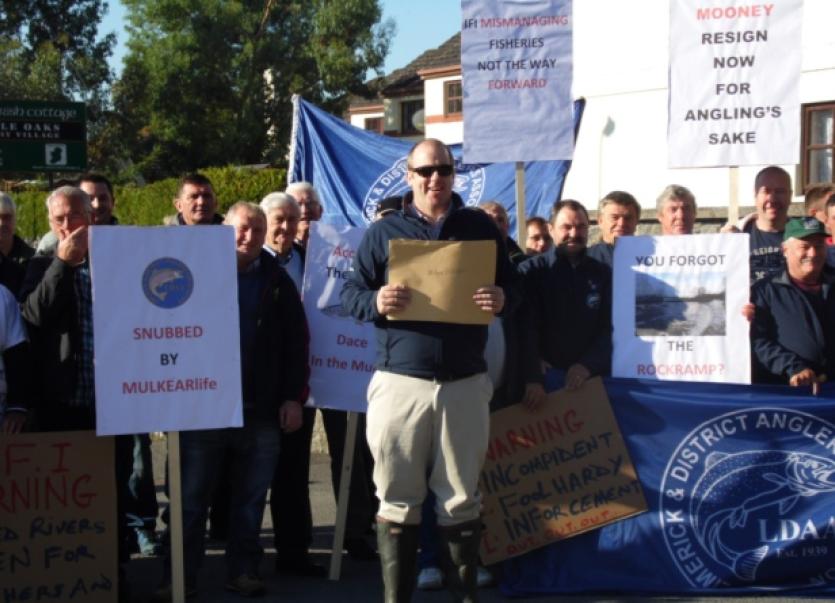 OVER 60 anglers staged a demonstration outside a major conference in Castleconnell, claiming their association had been “snubbed” for the event.

OVER 60 anglers staged a demonstration outside a major conference in Castleconnell, claiming their association had been “snubbed” for the event.

But Inland Fisheries Ireland said an open invitation had been extended to Limerick and District Anglers Association and all others who merely had to register online in advance.

The Castle Oaks Hotel was the venue last week for the MulkearLIFE conference, charting progress on a €1.7 million programme aimed at rehabilitating degraded salmon, sea lamprey and otter habitats along the Mulcair.

Half of the funding for MulkearLIFE comes from the EU and its main partners are Inland Fisheries Ireland, the OPW and Limerick City and County Council.

With its work set to conclude this year, MulkearLIFE hosted a major conference on river restoration projects that attracted local, national and international delegates to Limerick over two days.

But not among them was anybody from Limerick’s biggest angling association, the Limerick and District, 62 of whose members staged a demonstration outside the hotel gates on Wednesday morning.

Eoin Brockert, the association’s secretary, said that separating the fishermen from the delegates had been a crowd control barrier and two security guards, “which was a bit over-the-top for what was a very civilised protest”.

He explained that Limerick and District had a number of issues with the works carried out along the Mulcair to date, including the removal of sections of Ballyclough Weir which Mr Brockert believes has allowed the dace, an invasive fish species, to encroach further upriver than before.

The MulkearLIFE website says in connection with the conference that it “regrets that members of the Limerick & District Anglers Association did not wish” to attend.

Mr Brockert vigorously disputed this, contending that while another local angling association had been invited to attend, Limerick and District Anglers had been given the cold shoulder.

“Limerick and District Anglers Association were completely snubbed by both MulkearLIFE and Inland Fisheries Ireland for this conference,” he asserted.

“We did not even receive a reply or acknowledgement to applications submitted by two of our members to attend despite being the oldest and largest stakeholder on the system with well in excess of 280 adult members. This is not the first time this has happened with fishery events.”

But Suzanne Campion, IFI, told the Leader this Wednesday there was “no question of anybody being stopped”.

“It was open registration for everybody. A number of their members had registered. I don’t think they came in on the day but anybody could register and come.

“You registered online beforehand; there was no question of anybody being stopped. As far as I know two of their members had registered to come and their badges were waiting for them inside the conference,” Ms Campion said.

Among the grievances being aired by Mr Brockert are what he regards as over-zealous enforcement of the regulations against anglers by the IFI while the great damage being done on the Lower Shannon by poachers is not being policed enough.

“Just one example we had this year was a case we know of where IFI handed out an on-the-spot fine to an old age pensioner of €100-plus for fishing the wrong type hook,” said Mr Brockert.

He explained that the offence was that the angler - “an old man who can barely walk and an easy target” - was fishing with a three-barbed hook rather than with a single barb.

“This is while ignoring the illegal netting practices taking place on the Lower Shannon which is at epidemic levels.”

“If there are scientific recommendations, we go with those. The salmon conservation laws, the different permits, licensing and the whole lot is standardised. Every year, the scientific information is looked at; recommendations are made and brought into law and we enforce the law,” said Ms Campion.

“There are a lot of anglers around the country very unhappy about different rivers being opened or closed. We constantly have people saying ‘they are netting the rivers’, ‘it’s not being enforced’ and so on. We have a hotline to which people can report 24 hours a day. We encourage anglers to tell us where the issues are.”