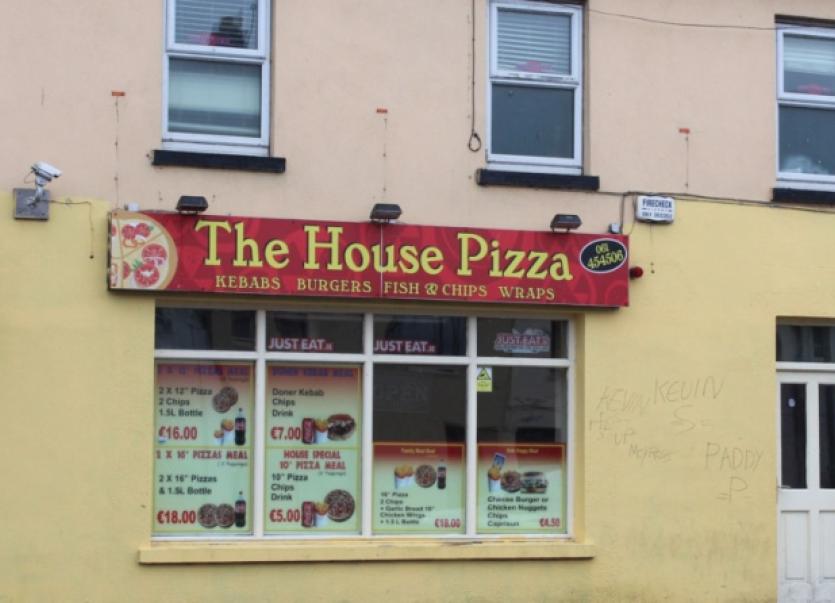 A TAKE-AWAY in Thomondgate has been fined €50 after one of its regulars bit into a piece of plastic in his 16-inch pepperoni pizza.

A TAKE-AWAY in Thomondgate has been fined €50 after one of its regulars bit into a piece of plastic in his 16-inch pepperoni pizza.

Customer Marcos Nanning told Limerick District Court that he purchased the pizza just before 8pm from the House Pizza take-away on Shelbourne Avenue in Thomondgate on April 17, 2013, on his way home from work that evening.

Taking to the stand, he said when he bit into the pepperoni, chicken and cheese pizza, he found something hard and initially thought it may have been an over-cooked piece of chicken.

He rang Citizens Information, who informed him to contact the HSE officer on the Dock Road, and he signed a food complaint receipt on April 19, after bringing in the “foreign object” and the remaining slice and a half of pizza.

Lorraine Tubridy, the environmental health officer, said when she visited the take-away she found that the piece of plastic appeared to match a chipped container in the fridge, which contained the chicken pieces.

The items were sent to Galway for testing, however Ms Tubridy told the court that the container wasn’t examined as it had been “misplaced” in the offices in Ennis during the flooding.

Dr Andrew Flanagan analysed the items in the HSE laboratory in Galway and said this type of plastic is made to withstand high temperatures, particularly in cleaning.

However, the court heard that the oven used in the take-way cooks pizza for six minutes at 540 degrees Celsius. Dr Flanagan said this piece of plastic would only “soften slightly” at 550 degrees.

Mr Devane said no other complaints have been made against the premises, which has been in operation for over two years.

Mr Jahid told the court that while one person makes the pizza, another person cuts the pizza and should have noticed the unusual topping.

The court heard Ms Trubridy visited the premises on numerous occasions, and “everything was in order”.

Judge Eugene O’Kelly said the complainant “had no reason to make this story up, and was not looking for compensation.”

The owner of the premises faced penalties of up to €5,000, and a term of imprisonment of up to three months for being in breach of food safety regulatons.

He said this was an “isolated and unforunate incident”.