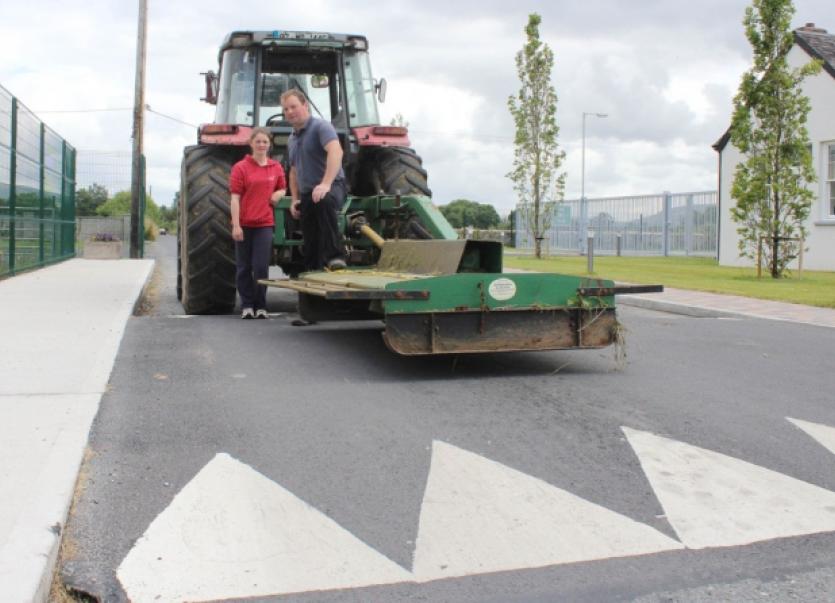 A HASTILY installed ramp beside the new library in Cappamore, is causing accidents instead of preventing them, say locals.

A HASTILY installed ramp beside the new library in Cappamore, is causing accidents instead of preventing them, say locals.

Local farmer Roger Keogh says dozens of cars, trucks and buses have been damaged since it was put in place three months ago.

“It is simply too high, it is overkill. It is supposed to stop accidents but it is causing them,” said Roger.

“The bottom of the car is hitting off it as you go over it. The front of it hits off it going up on to it too. You are expected to pass DOE, NCT, pay road tax, insurance and something like this is put up on the public road. It is crazy,” said Roger.

Bigger vehicles don’t escape either. Roger often brings a tonne of fertiliser on the back of his tractor to spread on outside land.

“After going over it you would be looking back behind you thinking is it still there? The council told me they had to put the ramp there for safety reasons but it is causing more damage. There was always a primary school there and never a ramp there,” said Roger.

“They made a mistake on the footpath. They should have lowered down the footpath at either side and put pedestrian lights and a crossing. They spent €1 million on a fantastic state-of-the-art library that we are all thrilled to have but it is a pity to have this fiasco outside it. They have a pedestrian crossing outside the new school in Doon with 700 pupils and this should be the same,” added the Limerick IFA pro. Another local measured it and found it to be six inches high when it should only be four inches.

“It is the most ridiculous thing. I don’t know why they put that ramp there. It has done a lot of damage to cars. I have never seen a ramp that high,. It is the Mount Everest of ramps,” said the local, who doesn’t want it lowered.

“It should be taken away. It was put down in a day shortly before the library was officially opened so surely it can be taken up quickly too. There should be pedestrian lights and crossing. It would be much safer, especially for blind people and those in wheelchairs. Where the ramp is, you are either coming from or going in to the village so you can’t be driving at speed. Even at very slow speeds it causes damage.

“When you come to it you have to go into first gear and crawl out over it. Going down the other side the exhaust could go or the shocks because it would bounce off it. I’ve heard empty trucks bouncing coming off it - a lot of shocks and things like that are being damaged,” said the local, who added that the cap of the ramp is all torn.

“People don’t realise the damage being caused. The signs are up on top of it so strangers visiting the excellent library are on top of it before they know it.

“The other evening there was a trailer left there. Obviously it broke the hitch and it was just left there until they got something to tow it away. It is a disaster and is costing people hard-earned money.”

Cllr Noel Gleeson said the ramp is very high. He has brought it to the attention of engineers who said they are looking into it.

“It was an emergency at the time it was put down. The had it wired for the proposed pedestrian crossing on the Doon road but we objected to that as a community. It was too near the right hand turn, we were certain somebody was going to be hurt there. Coming from the straight Doon Road you would see it but not when you come down the village and turn right for Doon. It was too near the cross,” said Cllr Gleeson, who says ideal situation would be to have a pedestrian crossing where the ramp is.