Four sleeping in one bed in living room after Limerick floods 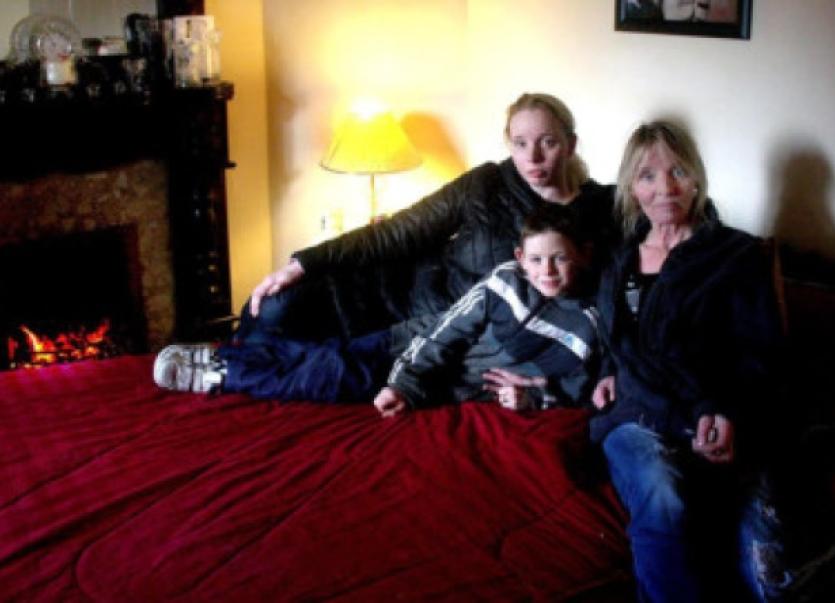 A MOTHER and three of her children are still sleeping in a bed in their living room in St Mary’s Park three weeks after the floods.

A MOTHER and three of her children are still sleeping in a bed in their living room in St Mary’s Park three weeks after the floods.

Diane Ryan, 51, a mother of ten from St Munchin’s Street, said they have no choice but to sleep in front of the fire for warmth each night after their home was destroyed in the floods, which saw waters creep up to the third step on her two-bedroom home.

Since the worst floods the country has ever seen ravaged the city’s northside, Diane has been sleeping downstairs in a double bed with three of her children - Donna, 28, who currently has a lung infection, Sarah, 15, and Kieran, 11.

Her son Ricky, 19, also sleeps in the downstairs room on the couch, as the bedrooms upstairs are no longer inhabitable.

Her husband,Daniel, 53,has been forced to move out of their home due to health complications and is now living in Tipperary with relatives, while their 22 year-old daughter Joanne, who is five months pregnant, has also found alternative accommodation, along with her other siblings.

With no central heating, cooker, washing machine or any mod cons, she said the family are surviving on donations of bags of coal and meals provided by volunteers each day in the King’s Island community centre.

Inspite of the hardship they face, she said: “In a million years you wouldn’t find better neighbours than here, and we are grateful for everything everyone has done for us. Ger Hogan and his horse Peg rescued us that morning from the floods. It was unlike anything we’d ever seen, just frightening, especially after the storms last week.

“It’s freezing. The only heating we have is the fireplace. It’s grand and warm at times, but we might not get coal every day.

“The walls are freezing with the cold and full of damp. Rain was coming through the roof. I have nothing in my kitchen, only a sink with a bucket underneath.

“We have no insulation in the attic, no central heating, never had done. We’re used to it in a way, but this is worse than anything we’ve ever experienced and I’ve lived here for 25 years. I wouldn’t want to leave here in a million years.

The family of 12 have always lived in this two-bedroom house, but moved tables and chairs out of their front room to make it into a third bedroom. Diane said she hoped to be moved into one of the neighbouring houses, but instead the council boarded up vacant houses at either side of their home. She has been offered a flat on either Broad Street or Cecil Street, but says there would be no more for her family.